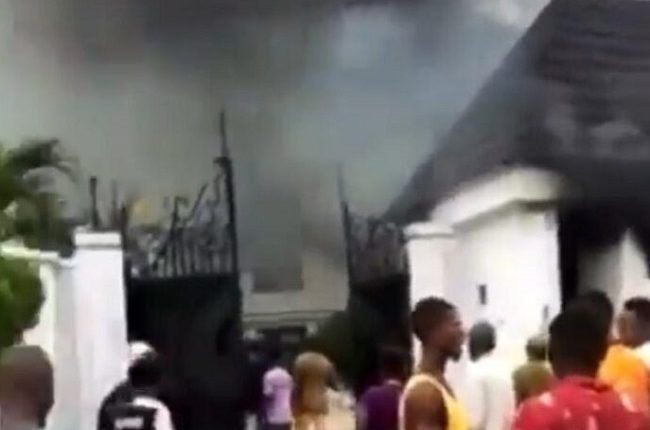 The attack on the house occurred early Saturday morning while the assailants were said to have deployed petrol bomb which resulted into a fire outbreak in the compound.

An Imo government source confirmed the attack which saw sympathizers, villagers struggling to extinguish the fire.

As of the time of filing this report, vehicles which were said to be official vehicles were in flames as a suspected lifeless body was also seen lying in front of the governor’s house.

This is happening at a time the security in the South-East zone has deteriorated with serial attacks on police stations across the states.

All the states in the SouthEast have experienced attacks by the unknown gunmen who have not shown any signs of halting the attacks.

The Imo State Police Command has confirmed the burning of the house of the governor of Imo State, Sen. Hope Uzodima at Omuma in Oru East Local Government Area of the state.

In a statement issued by the command and signed by the Police Public Relations Officer, SP Orlando Ikeokwu Godson, said that the hoodlums attacked the governor’s house by throwing in a petrol bomb as a result of which two cars were burnt.

He said that the hoodlums were successfully repelled, and none of the building was set ablaze.

According to him one unarmed operative of the National Security and Civil Defence Corps, NSCDC, was killed in the process, while a police sergeant and another NSCDC operative in their private vehicles at Mgbidi junction along Owerri-Onitsha express high way were killed, when the attackers were escaping.

An eye witnessed told Sunday Tribune that the attackers stormed the place with their vehicles in there numbers dressed in black attire.

The two vehicles, among which was a coaster bus, packed beside the gate and another car inside the compound were set on fire.

The eye witness equally said that the situation had resulted in the blockage of Owerri Onitsha express highway and other adjoining roads by security personnel drafted to the area. However, the Commissioner for Information and Strategy, Mr. Declan Mbadiwe Emelumba, has described the unfortunate incident as a politically motivated one.

In his statement issued on Saturday in Owerri, the commissioner said that gallant security operatives repelled an attack on the Omuma country home of the governor.

He explained that “at about 9am today, Saturday, April 24th, a group of hoodlums numbering about 15 driving in a motorcade of three vehicles accompanied by a tipper loaded with used tyres, stormed the country home of the governor in Omuma, Oru East LGA and attempted to burn down the house”. He denied the setting on fire of the governor’s house, disclosing that vigilant security operatives attached to the house successfully repelled the attack and consequently minimised the damage they had planned to unleash.

He added that during cross fire that ensued, a few casualties were, however, recorded.

According to him, government had directed the relevant security agencies to expedite investigation on the incident and promptly apprehend the sponsors and their agents and bring them.

This is not the Nigeria of our dream —CAC president