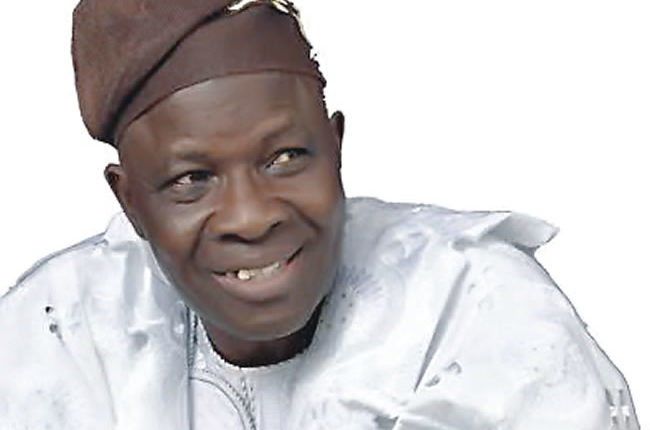 As a veteran in the movie industry, would you say the industry is developing at the right pace?

The industry has developed a lot, because if one is ready to work, there are a lot of opportunities to excel in the acting profession now, compared to our time. If not for the exploiters amongst us, who just want to enjoy all the benefits and profits alone, there are several avenues to make money these days. Even when your movie is being aired on DSTV for example, you get paid for it, but there are some people who have decided to block those avenues, depriving others of benefiting from this.

Who are these people?

Well, they know themselves.

Some people complain about that too much use of the English language in Yoruba movies these days has stopped them from watching Yoruba movies, what is your say on this?

It is civilisation that caused all these. Even at our various homes, it has reflected in the way we communicate. We can’t say a sentence in Yoruba Language without slotting in English language one way or the other and that is why it reflects in our movies too these days. The Yoruba language is not even complete anymore, in most homes now. All you hear is ‘good morning’, ‘how are you?’, ‘Greet Daddy’, ‘Bring that thing’, ‘Sit down’ and so on. It has now become part of us, so it is civilisation that caused all these.

So, what do you think can be done to ensure that our movies, at least, serve as an avenue to learn more about our indigenous languages? Can this self awareness be restored?

Which of your movies or projects would you regard as the best ever and why?

I don’t think there is a movie I did that I don’t love, but my movie ‘Ti Oluwa N’ile’ which I wrote still receives accolades from viewers. So, I can say that movie is one of my best so far because people speak well of the movie a lot.

Why do you think ‘Ti Oluwa N’ile’ was so outstanding?

The way we shot that movie made it outstanding. Tunde Kilani’s expertise made the production of the movie a success, having mastered what I wrote.

Are there movies you did and regretted working on?

I have never worked on a movie and regret ever working on it because I always make sure I work on my movies in ways that viewers will learn one or two things. Even if I was invited to feature in a movie, I ensure it has a good storyline before agreeing to take part in such a project.

On this job, when was your first time travelling out of the country and how was the experience?

My first experience traveling out of this country was when I travelled to Mecca and I was so happy. No one sponsored my pilgrimage; I got the money to travel to Mecca from my earnings from this acting profession. So, I was really happy.

If you had the opportunity to start your acting career all over again, what would you do differently?

Well, just like the industry has now developed so well and it is now different from the stage plays that we were doing then, they now do cinema movies. I would also love to produce cinema movies.

What are the movies or projects you are working on or have worked on of recent?

I have several projects on the ground that I am working on and most of them are even online. The most recent one is entitled ‘Iwa’ and another one which will soon be out is called ‘Silent Millionaire’. We just finished the production of ‘Silent Millionaire’ and it will be out very soon.

Is there anything you would like to change in the movie industry if you can do that?

We can only enjoin them not to say because they want give the audience what they want; they should now be promoting nudity or sexuality in the movies. They should do things that are appropriate to God and man.

Is there a day you will never forget in your acting career?

That was the day I was invited to Chicago to receive an award. It was a day I will never forget in a hurry because when I got there I was surprised by the reception I got; I was surprised that they were all waiting there because of me, in faraway America.

What would be your advice for people planning to start a career in acting?

I would say honesty and patience are the keys to success. They should also ensure that whatever they do is in line with God’s guidelines and they should not just believe they are only acting. Acting goes beyond just demonstrating to the camera, because whatever you do, people will learn from it, whether good or bad. So they should do things that will please God and at the same time please the people.

Is there anything you think the government can do to assist actors, especially veterans in the industry who are ageing and are literally retiring?

I don’t know how to say this; do they want us to start begging people on the street before they assist us, financially or otherwise? We cannot tell them this is what they should do for us; it is the people that watch us that will assist us in whatever way they can.

What is your advice for present-day stars on how to stay relevant?

I will say, the viewers are the ones who will tell us what they see about us. We cannot see ourselves. When the people see you and they see pride in you, I will say, that thing that has made you arrogant will one day be gone. Whatever position one is today, he or she will leave the place one day, so my advice for them is that, they should not allow any position or fame they have acquired today make them arrogant.

How has the coronavirus pandemic affected you and what have you been up to?

It has really affected me. The fact that I could not travel was a big challenge for me because when you are invited to a movie location and because of the lockdown you can’t travel, how will you eat? At the same time, we have to maintain social distancing. Everything became so difficult. So the coronavirus has not allowed me do anything. I have just been at home not really doing much.

We’re Confused By FG’s U-Turn On WAEC – ANCOPPS
PRINCIPALS of secondary schools nationwide under the aegis of All Nigeria Confederation of Principals of Secondary Schools (ANCOPSS) have also expressed surprise over Minister of Education, Mr Adamu Adamu’s announcement on Wednesday withdrawing all the SS3 students in all the 104 Federal Government colleges… Read Full Story
Abdulsalami says house not searched by EFCC
AS the investigation into the corruption allegations levelled against the embattled acting chairman of the Economic and Financial Crimes Commission (EFCC), Ibrahim Magu, entered its fourth day on Thursday, the secretary of the anti-graft agency, Olanipekun Olukoyede and some of its directors have appeared before the panel … Read Full Story
Buhari To Sign Revised N10.8trn 2020 Budget On Friday
President Buhari will on Friday sign into law the revised 2020 budget of N10.8 trillion passed by the National Assembly last month… Read Full Story
10 Aspirants To Boycott APC Primary In Ondo ? Olatuja, Factional Chairman
Ten of the aspirants who picked the All Progressives Congress (APC) Expression of Interest and nomination form ahead of its July 10 primary in Ondo State may boycott the election… Read Full Story
Why Zamfara House Of Assembly Is Sitting In Primary School
The Speaker of Zamfara State House of Assembly, Alhaji Nasiru Mu’azu has said the ongoing renovation works in the assembly complex will not hinder the lawmakers from passing laws that will be beneficial to the… Read Full Story
Afenifere Decries FG’s Decision On WAEC Exams
Pan- Yoruba socio-political group, Afenifere, has kicked against Federal Government’s decision to withdraw Nigerian students from writing this year’s examinations conducted by West African Examination Council (WAEC), on account of ravaging COVID-19, describing such move as amounting to the country being burdened… Read Full Story
The Blow Of Hajj 2020 ‘Cancellation’ Across The Muslim World
FOR much of his life, Abdul-Halim al-Akoum stashed away cash in hopes of one day travelling from his Lebanese mountain village to perform the hajj, the pilgrimage to Mecca that all Muslims who can are obliged to make once in their lives. He was all set to go this year until the coronavirus pandemic forced Saudi Arabia… Read Full Story
Long Walk To Freedom: After 21 Years Of Wrongful Conviction, 60-Year-Old Man Reunites With Family
Olusina Ajayi Olatinwo, who is over 60 years of age, recently got united with his family in Ibadan, after spending 21 years in different prisons across the South-West, on a wrongful conviction that led to a death sentence. YEJIDE GBENGA-OGUNDARE reports that it was a bitter-sweet experience for his family who had… Read Full Story
We Can’t Let COVID-19 Become Permanent Threat To Our Lives — Islamic Scholars, Experts
GOVERNMENTS, religious and social organisations and the citizenry should all see COVID-19 as a common enemy and work individually and collectively to tackle its menace with a view to ensuring that it does not constitute a permanent threat to safety and the economic, spiritual and social well-being of the human society… Read Full Story
EDITORIAL: On The Allegations By Lance Corporal Ndakpini
IN a video released on June 23 which went viral on the internet, Lance Corporal Martins Ndakpini of Eight Division, Nigerian Army, Sokoto, criticised the leadership of the national security and defence apparatus, including the Chief of Army Staff (COAS), Lt.-General Tukur Buratai, other service chiefs and the National Security… Read Full Story
Davido, Wizkid Will Beg For My Collabo — Dami J
Damilare Johnson, popularly known as Dami J, is a new act in the Nigerian music industry but his unique sound and artistic versatility are steadily making way for him in the front row… Read Full Story
Police Woman Turned Disc Jockey: My First Love Has Always Been Music — DJ Sexy Jin
It may be shocking to many seeing a decorated female Nigerian police sergeant mount a party stage as a DJ, but this is what Odiase Selimot Adejoke is generally known for. Now known as Dj Sexy Jin around entertainment circles, she recently relocated to the United States of America to join her husband… Read Full Story
Share FacebookTwitterGoogle+ReddItWhatsAppPinterestEmail

What would you do on your first day in school after COVID-19 break?

Husbands are reaping what they sow