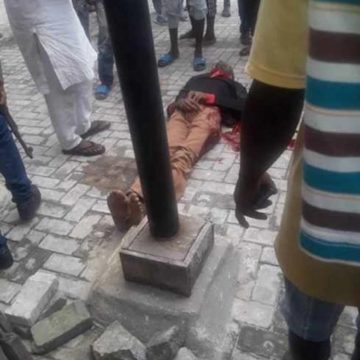 Barely four days after the killing of Corporal Etaga Stanley during #ENDSARS protest at Ughelli, another police officer was, on Sunday, killed by gunmen at Osubi in Okpe Local Government Area of Delta State.

This is just as suspected assassins have reportedly killed the chairman of Udu Harbour Market in Udu Local Government Area of the state, Comrade Freedom Odiete.

Reports say the deceased was shot dead while trying to confront the armed hoodlums who attempted to break into a popular plaza along the busy Effurun-Abraka Road.

The killing created pandemonium, on Sunday morning, in the area as people ran for safety.

The identity of the deceased still shrouded in mystery but was said to be on special duty from Kebbi State.

“A mobile police officer was shot dead this morning (Sunday) at Osubi near Effurun.

“Some gunmen were trying to rob the mall when the officer was shot dead. I can’t tell if his rifle was carted away but he died on the spot.

“The incident took place this morning at a shopping mall in Osubi. He was a mobile policeman from Kebbi State.

“He wasn’t an officer of the Delta Police Command,” a source told journalists.

ALSO READ: International day of the Girl-child: Expert emphasizes on importance of education

Meanwhile, a source said the suspected assassins who killed the market leader, Comrade Odiete, ambushed him at Cross and Stop junction, Ekete-Inland while headed towards the DSC Expressway.

The suspected assassins reportedly shot at him on his left hand but managed to escape to a nearby church where he hid in the toilet.

But the hoodlums, undone, trailed the deceased through the drops of his blood to the toilet and shot him severally until he gave up the ghost.

As of the time of filing the report, the corpse of the deceased had been deposited at a morgue by men of the Nigeria Police, Ovwian Division.

It will be recalled that two days ago a policeman and a civilian were reportedly killed by suspected robbers who attacked a police checkpoint at Eku in the Ethiope East Local Government Area of the state.

Meanwhile, the Police Public Relations Officer (PPRO), Onome Onovwakpoyeya, could not be reached late Sunday night as of the time of filing the report.