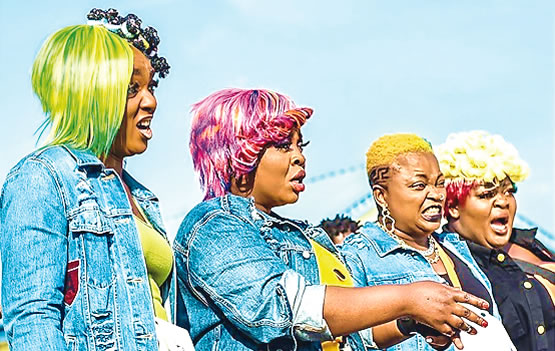 Breaking yet another record, latest production from Funke Akindele’s Sceneone Films, ‘Omo Ghetto (The Saga)’ has extended its lead at the top of the list of highest-grossing Nigerian films, making well over 531 million Naira in just six weeks of its release.

The movie was released on Christmas day, December 25, 2020 and has, since, been receiving great compliments from movie lovers and is still enjoying massive viewing in cinemas across the globe.

Funke’s Omo Ghetto (The Saga) has overtaken Kemi Adetiba’s-directed ‘Wedding Party’ which has held the number one spot since its premiere in 2017, grossing 453 million Naira.

As at the time of filling this report, below is the list of top 10 highest-grossing Nigerian films of all time and how much they have made so far.

Omo Ghetto: The Saga also known as Omo Ghetto 2, is a 2020 Nigerian gangster comedy film co-directed by Funke Akindele and JJC Skillz. The film stars Funke Akindele, Chioma Akpota, Nancy Isime and Eniola Badmus in the lead roles. This was the second film in the Omo Ghetto franchise and it was also the sequel to the 2010 trilogy film Omo Ghetto.

Tips that can help you save money

Simi, Omojuwa, others blast Samklef over ‘insensitive’ comment about…

Fame, money is only bonus in music, Leczy says