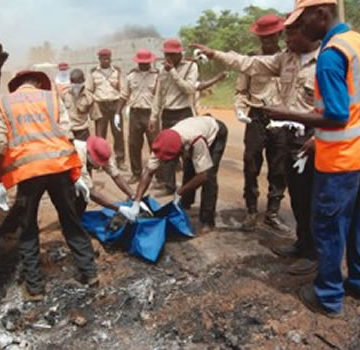 THE Federal Road Safety Corps (FRSC), has revealed its plans to reduce road crashes in the country through intelligence patrol.
Their Zonal Commanding Officer incharge of Sokoto, Kebbi and Zamfara states, Mr Osas Osadebamwen disclosed this during the forth quarter 2018 zonal retreat held in Sokoto, on Monday.
The participants were drawn from both sector and zonal commands of the commission in Sokoto, Kebbi and Zamfara States.
Osadebamwen charged his personnel that time has come for them to adopt patrolling system that is base on intelligent gathering.
ALSO READ: This rail system must be completed in December
He said the retreat is aimed at abreast the participants on the need for intelligence based patrol, especially during the EMBER months.
In his statement, “This retreat was in line with the commission’s efforts to ensure safety of both its personnel and road users, especially in the wake of prevailing insecurity in some part of the country.
“There is need for us to be abreast on issues of intelligence. Today’s retreat will be looking at intelligence based patrol. It is a capacity building where we train the trainers. The officers in turn train personnel in their respective capacities.” Osadebamwen explained.
The  zonal commanding officer, acknowledged the security treats facing personnel during the discharge of  their duties saying that “FRSC is unrelenting to ensure safety of its personnel.”
The Guest Speaker and Security Consultant, Mr. Peter Alhassan said the retreat thermed ‘Intelligence and Operation Security in ‘FRSC’ is a capacity building aimed at abreast the participants on the issues of security and intelligence during their operations.
Federal Road Safety Commission (FRSC)
Share