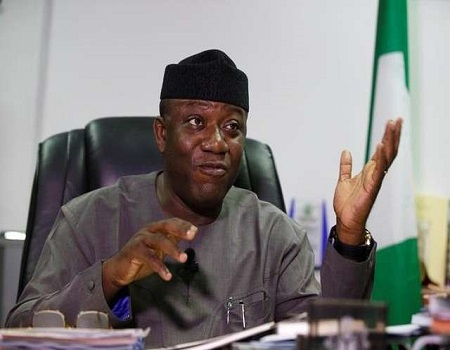 The Ekiti State government has revealed that it would be spending a sum of N334 million for dredging of waters across the state in order to prevent the reoccurrence of flooding that ravaged most part of the state.

Some sections of Ado Ekiti, the state capital like the Ita Eku, Ureje, Eminrin, Enbassy Island and others, were submerged by flood in September, leading to the collapse of Ureje bridge along Afe Babalola University and the Federal Polytechnic road.

The Commissioner for Information, Mr Muyiwa Olumilua while addressing newsmen after the State Executive Council meeting on Monday added that the council also gave approval for the procurement of N54 million customised Safe Delivery Kits to be distributed to pregnant women across all the 16 local government area of the state.

ALSO READ: I have no regret siting Transport University in Daura ― Amaechi

Olumilua said: “the dredging is to alleviate the suffering of the inhabitants of some critical areas in Ado Ekiti.

“Areas to be dredged include; Obala-Balemo-Elemi, Ita Eku-poly road-Eminrin, Omisanjana-Ureje-133kva, Awajin-Ureje road and Ireakari-Ilawe road totalling 18,500 metres and at the cost of N194, 530 million and is to be delivered within 12 weeks.”

Olumilua added that due to persistent flooding that hit  Ikere-Ekiti this year, the government is to dredge Osun stream channel, construct concrete channel at Temidire section of the town and reconstructing a failed culvert at Ajolagun at the cost of N140 million.

The Commissioner stated that the council also approved the completion of the state Secretariat complex phase V at the cost of N621 million and to be delivered within six months.

He said the council also deliberated and approved the Ekiti State Discrimination Against Persons with disabilities Prohibition bill 2019, to deal with matters affecting those suffering all manners of neglect in the state.

Olumilua said the council approved the Ekiti State Housing Corporation Bill 2019 to deal with issues of housing in the state.

I have no regret siting Transport University in Daura ― Amaechi

Sanwo-Olu urges corps members to be agents of positive change