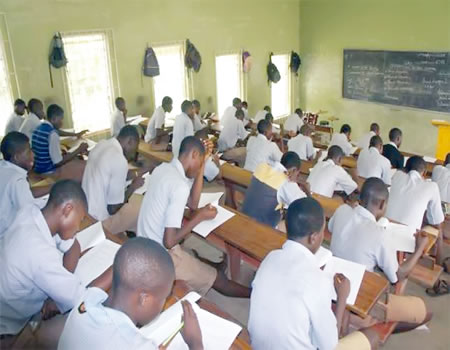 The Federal Government has released the results of the 2020/2021 National Common Entrance Examination into the 110 Unity Schools with a total of 24,416 candidates passing the examination, having scored a minimum of 66 points.

A total of 70,580 candidates sat for the examination that was conducted by the National Examination Council (NECO) on 17th October 2020.

Minister of Education, Malam Adamu Adamu, announced the release of the results, on Monday in Abuja, after it was officially presented to him by the NECO Registrar, Professor Godswill Obioma.

Obioma said the National merit cut-off point for admission into the Federal Government Colleges is 142, while also noting that out of the over 92,000 candidates that registered for the examination, a total of 16,713 candidates were absent on the day of examination as a result of the #EndSARS protests that had engulfed many states of the Federation.

The Minister in announcing the results, named three candidates who performed outstandingly in the examination, with the overall best being, Umeonyiagu Chinua Crucifixio, from Anambra State, scoring 199 out of 200. The candidate applied to study at Federal Science and Technical College, Awka.

He noted also that the total carrying capacity of our 110 Unity Colleges now stands at 26,625, having added 720 slots with the establishment of six more Federal Science Technical Colleges across the six geopolitical zones.

Against the backdrop of COVID-19, the Minister directed the selection committee, to adhere strictly to the approved carrying capacity of each school without exception, saying this was to avoid the congestion of the classrooms thereby rendering children vulnerable to the pandemic.

Adamu insisted that this year’s admission, the 60 per cent merit-based admission would come first, followed by the 30 per cent equality of states and 10 per cent discretion.

He, therefore, directed that within 72 hours of the receipt of the results, Principals were to complete both the merit-based 60 per cent and 30 per cent of equality of states admissions.

“I am indeed delighted with the speed with which the leadership of NECO led by its Registrar Prof. Godswill Obioma has conducted the 2020 National Common Entrance Examination in spite of the setbacks occasioned by the outbreak of COVID-19 and the #EndSARS protest.

“As has been the tradition for decades, the admission criteria include 60% strictly on merit, 30% based on states’ representation in the Unity colleges and the remaining 10% to considerations such as special needs candidates, gender, local cover other sundry community and biological children of teachers, Parents Teachers Association (PTA), School-Based Management Committee (SBMC) and old students organisations among others.

“The selection meeting to be held at a designated date and venue will deal with the shopping and swopping of candidates to meet the 30% states representation as much as possible.

“It will also handle issues bordering on compliance with laid down criteria in the admission processes, underutilisation of carrying capacity, and related matters,” he said.