Arts and Culture
By Akintayo Abodunrin On Apr 19, 2020 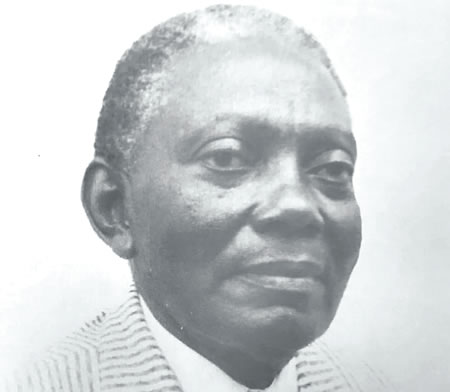 I met Eldred Jones personally for the first time in 1982 under a circumstance I have found delightfully unforgettable. From his base in Sierra Leone he had been invited to the then University of Ife (now Obafemi Awolowo University) for a professional engagement. But before leaving home, he never forgot to tuck in his travelling bag a file containing the manuscript by a rookie academic, submitted and accepted for publication in African Literature Today (ALT), Africa’s influential literary journal for which he was founding editor. His engagement over in Ife, Professor Jones set out for the University of Ibadan to see the author of that manuscript to clarify two ‘issues’ with him: one, the correct version of a Yoruba name as spelt in the manuscript, the other a debate as to whether the correct punctuation mark in one sentence in the middle of the essay should be a comma or semi colon! It took no more than a few minutes to iron out these ‘gigantic’ issues, and Professor Jones put back the manuscript in the file, the file back in the bag, ready to go. But he didn’t leave without commending the accepted manuscript both for its ‘quality’ and its ‘usefulness’; for according to him, we needed more of  its kind of stylistic,  language-based study to further widen the scope of a journal that had become an authoritative platform for African literature in all its ramifications. A few months later, African Literature Today, Number 13 was out, with my article, ‘Words of Iron, Sentences of Thunder: Soyinka’s Prose Style’, within its hallowed covers.

The impact of this first meeting with Professor Jones has remained with me to this day. Witty, easy-going, and personable, he was the kind of elder/leader who put you at ease with a ready smile and sincere fellow feeling. One of Africa’s renowned scholars and university administrators, he carried himself with grace shorn of showy grandeur, simplicity ennobled by superb delicacy, a near-magical aura that announced his presence in the public square without the effort of any Master of Ceremony. A scholar and teacher with a monk-like fidelity to detail, Professor Jones taught and demonstrated that belief that no academic subject was too insignificant for the scholar’s investigation; no matter too little to attract their meticulous consideration. Thus when Professor Jones sat by my side and engaged me in a finnicky differentiation between a comma and semi colon within the syntactic structure of a sentence, his lesson went way beyond the punctuational protocol of academic writing. That lesson foregrounds the ability to recognize the big in the small; the curious visibility of unseen things; the ultimate fact that big things derive their bigness from the concerted complexity of little things. That very ability is itself the product and manifestation of an attitude which bodies forth as a propensity; a meticulous method which becomes a habit. It is the kind of attitude that makes the difference between development and underdevelopment, success and failure. It is the kind of thoroughness so indigenous to old Krio culture and pedagogy in Saroland, the kind that many Nigerians  of my generation learnt from our high school teachers, some of whom were proud alumni of Fourah Bay College, Africa’s oldest Western-style university institution in West Africa.

A Shakespeare scholar and acclaimed authority in English letters in all their astounding aspects, the author of Othello’s Countrymen knew from both personal and professional experience the vital role of literature in the shaping of a people’s culture, the revitalization of their memory, the cultivation and maintenance of their sense of self and racial pride. In a nutshell, he was achingly conscious of the fact that for a people to be in a position to control their own destiny, they must, of necessity, be in charge of their own story. Africa’s story and the critical responses to it had, for the most part, been shaped and determined by forces beyond the continent, and the rise and evolution of written modern African literature as we know it today were supreme attempts at the redressing of a gross exogeneist  and colonial disadvantage. Eldred Jones was there at the birthing of this literature, and up to the moment he breathed his last, he was one of its crucial nurturers and sustainers. This is evident in the readiness and enthusiasm with which he poured his vast erudition, insight, incomparable energy, and organizational acumen into the editing and management of African Literature Today from its infancy until it became one of the most authoritative platforms for the articulation of critical responses to African literature and – very important – re-orientation of its aesthetic paradigms. As Syl Cheney Coker, the eminent African writer  and Professor Jones’s compatriot, has said most eloquently in his own tribute, barely five decades after its founding, ALT  has become a thriving arena for the finest critics of African literature and fertile catalyst for the growth and development of the literature itself. Thus, Jones facilitated the creative-critical synergy so fundamental for the evolution of  African literature as a balanced, sustainable enterprise.

Eldred Jones was not only an enabling force and nurturer of a burgeoning literary tradition, he was also one of the continent’s leading scholars and literary figures. His work,  The Writing of Wole Soyinka, (1973), was the first book-length study of an author who later justified Jones’s vision and promise by becoming the first Black African to win the Nobel Prize for literature. But by far his most famous work is Othello’s Countrymen: The African in English Renaissance Drama (1965), a work whose scholarly and sensitive exploration of the literary representation of the African establishes a powerful concert of insights with studies such as Es’kia Mphahlele’s The African Image (1962), and Chinua Achebe’s generally acclaimed ‘An Image of Africa: Racism in Conrad’s Heart of Darkness’ (1977). And less than a decade before his transition, he endowed his beloved city/country with an unforgettable memoir, The Freetown Bond: A Life Under Two Flags (2012).

A staunchly resilient, personality, Eldred Jones led a life whose triumphs were almost equaled by its travails. He was struck by blindness at the height of his professional  powers, but he never allowed this adversity to dim the light of his mind or terminate his lifelong love for books and ideas. He kept up his position as chairman of the Noma Award Jury, and was a prominent resource person on the AFRICA’S BEST 100 BOOKS OF THE CENTURY Selection Committee whose award presentation took place in Cape Town in 2002. In the major literary session accompanying that event, Eldred Jones held us all spell-bound with an erudite, wide-ranging, and current lecture on African literature, even without a shred of paper anywhere around him! When the event was over and I asked him in open-mouthed astonishment, ‘how did you do it, Prof.?’, he held up his wife’s hand and said ‘Ask Marjorie; she’s the author of the magic’. Marjorie’s smile bloomed into radiant laughter. There was so much tenderness in that laughter; so much beauty in its ‘author’. Over the years, I thought that the union of Eldred and Marjorie was made from heaven. African literature, nay the world’s literary heritage, is the beneficiary of that union. For Marjorie was not just a wife; she was also a soulmate, helpmate, facilitator,  most valuable enabler, and, above all, a warm and generous HUMAN being. We can never tell the full story of Eldred Jones’s role in the evolution of modern African literature without a long chapter on this Angel with abundant earthly beneficence.

And so Eldred Durosimi Jones has crossed seven rivers, climbed seven mountains, and landed softly in the valley of immortal ancestors. When in May 2016 our documentary team paid him a working visit in his hilltop residence in Freetown, he was about 91 years old. But his boyish face, mellow manners, poignant erudition, and tenacious memory teased me into the illusory feeling that he was just too good to die.  But as the Yoruba say, gbese n’iku. Yes, death is a debt. Durosimi has paid that debt now, and his reward is unvarnished immortality. Sleep well, Othello’s Countryman. Here now, a snatch from that song I sang when you turned 71 in 1996, and performed personally for you in your Freetown home some four years ago:

Live on, then, my Scholar-Poet,

Twilight shadows may be long,

who does not know that Life is stubbornly l-o-n-g-e-r?

Your vision now so internal, so eternal,

the raffia palm drops its honey

in the sanctity of your gourd

in your garden of a thousand fragrances

Let rivers empty their burdens into the waiting sea

let the moon wane and wax

in the laboratory of its sky;

your liberal wisdom sews the seasons

into proverbs and silky laughters

Your drum throbs in the marketplace,

you who master the immensity of night,

Waste management and battling the coronavirus