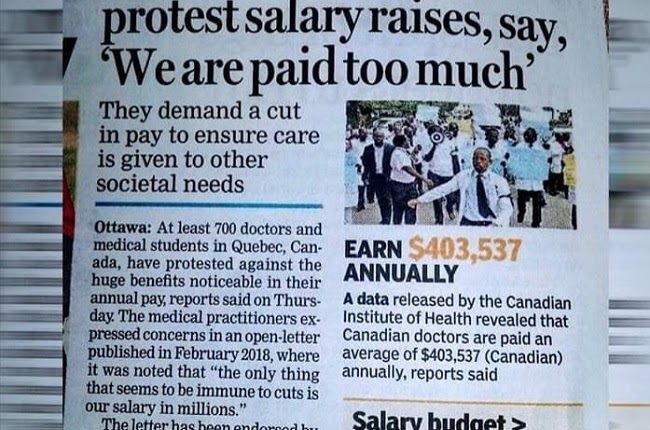 CLAIM: 700 Canadian doctors protest salary raises, say, we are paid too much

FULL STORY: On Wednesday, July 16, 2020, the social media was rife with reports claiming that 700 Quebec doctors protested salary raises in Canada, adding that the doctors said they were already being paid too much by the government.

Most of those who posted this claim credited a newspaper snapshot where the supposed report was contained.

The headline of the report reads: “700 Canadian doctors protest salary raises, say, we are paid too much,” saying: “They demand a cut in pay to ensure care is given to other societal needs.”

The accompanying information reads: “At least 700 doctors and medical students in Quebec, Canada, have protested against the huge benefits noticeable in their annual pay, reports said on Thursday.

“The medical practitioners expressed concerns in an open letter published in February 2018, where it was noted that the only thing that seems to be immune to cuts is our salary in millions.

“The letter has been endorsed by 217 general practitioners, 187 specialists, 150 residents and 163 medical students so far. The note was posted by Médecins Québec Nice…”

The report was published by Nigerian news blogs and websites including BodexNg, Gidi Feed.

A Google Reverse Image search showed that the post appeared on 9GAG on July 6, 2020, with the caption: “How Canadian is this news??” thereby attracting not less than 88 comments.

The snapshot was also circulated on the instant messaging app, WhatsApp on Wednesday night and Thursday morning.

Some other Nigerians who also posted this snapshot on WhatsApp and Twitter including Temmytourpe Collins🇳🇬 who tweeted at @sagamu1stSON lamented that the situation is different from Nigerian where doctors protest non-payment of salary.

A similar version of the report was also published by Watch Post Daily on July 8, 2020.

Checks by Tribune Online showed that the report was re-invented from 2018 when it was first published.

The snapshot in circulation showed that the protest took place in 2018. This, however, didn’t stop the people from re-circulating the image.

Google Reverse Image search showed that the image was first circulated in 2018.

Further checks revealed that the protest was reported between March 6 and March 12, 2018, by Guardian NG, CNBC, CNN, Washington Post, BBC.

A check done by Snopes on March 21, 2018 also showed that the report as at the time it was circulated and reported in 2018 was true.

Snopes reported that: “On 25 February 2018, MQRP (which stands for Médecins Québécois pour le Régime Public, or Quebecois Doctors for the Public Plan, a group of 500 Quebecois doctors dedicated to retaining the province’s universal public health system) published an open letter explaining their opposition to pay hikes negotiated between doctors’ unions and the provincial government.

“As of 21 March, the letter had garnered 944 signatures from people describing themselves as doctors or medical students. It’s not clear whether or how MQRP is able to prevent someone who is not a registered medical professional from signing the online petition, so we can’t be sure how many of the names listed under the letter actually belong to health professionals. Even if they all do, the 944 names listed on 21 March 2018 would still make up only 4.5 percent of the total number of doctors in Quebec. (According to the Collège des Médecins du Quebec, the standards-setting professional body for doctors in Quebec, there are nearly 21,000 active, registered doctors in the province as of 1 January 2018).”

The claim that Canadian doctors protested salary increase is misleading as the protest occurred in 2018 and not 2020 when it was re-circulated by news blogs and websites.

The researcher produced this article per the Dubawa 2020 Fellowship partnership withTribune Online to facilitate the ethos of “truth” in journalism and enhance media literacy in the country.

FACT CHECK: What did the Health Minister say regarding maternal mortality and…

FACT CHECK: Did Buruji Kashamu die on same date with his mother?