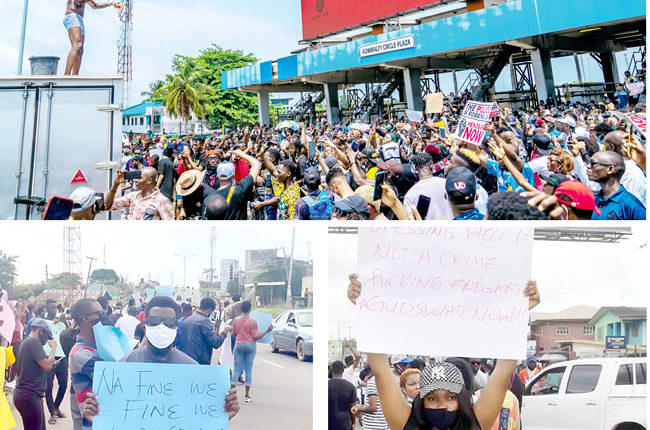 It started as a fight against police brutality, incessant unwarranted killings by the Special Anti Robbery Squad (SARS). It skyrocketed to a fight of long-term buried grievances, injustice, clamour for change and a progressive nation by youths. They had defied religious, ethnic and age bindings to come out in one voice hoping to start a revolution that would make Nigeria great again. FAVOUR BOLUWADE shares this firsthand report of social media users and youths, who were present at several protest grounds in the country.

I am still battling to get sleep since the shootings, because anytime I close my eyes, I see terror. Knowing some people we stood together on protest ground at even odd times, standing and clamouring for a good life are now gone by gunshots that we were protesting against is heartbreaking”.

That was one of the many uploads of Tosin Ogunleye; a lawyer, actor and social media sensation popularly known as Bro Bouche, who was a regular at the Lekki protest ground for two weeks. Those words were the representation of his feelings after the shooting that happened on 20th October, 2020 at Lekki tollgate. He had never hidden his patriotism towards his nation and, he, had said he was a conscious citizen and like every other youth, had every reason to protest against the brutality of SARS operatives. Ogunleye, is also a fashion conscious individual who combine colours and styles impeccably and is a part of the ‘beard-gang’ – meaning he kept full beards. He had every reason to be termed a ‘criminal’ by the SARS guys.

That had become a general issue Nigerian youths continued to be faced with. Folarin ‘Falz’ Falana had sung about the operations these uniformed men that had gone rogue in the song he released two years ago titled ‘This is Nigeria’.

Timi Agbaje, an active youth during the protest spoke with Saturday Tribune about the roles he played offline and online from the first day up till 10th October. The lawyer explained at length about how the protest went at Lekki Tollgate. He said there was unity, display of love and he had no choice to but to join the other youths. He said he had had his share of terrible encounters in the hand of the SARS men. He wasn’t expecting the turnaround that led to a massacre.

Agbaje said: “It was  a very peaceful, coordinated protest.  There was music, people talked about their experiences with the SARS unit,  there was a candle night procession and people came to share stories of how they lost their loved ones to police.

“I had not seen that unity and patriotism in a long time; people were looking out for each other, there was food for the hungry, there was a national spirit.  I joined the protest because it was  legal avenue to voice out my displeasure at the brutality faced in the hands of the police. I have had my own share of the story.

“When people see celebrities, there is a kind of togetherness it makes them feel. I can’t list all their names because they came out in their numbers. We believed in the cause, we were not tired, I was a part of it because it was peaceful. I can’t forget it in a long time. We demanded for what they wanted in the most beautiful, peaceful way”.

But, Joseph Akinnawonu said Falz or any celebrity posts on Twitter was not what convinced him to join, or any other celebrity; he went willingly because of what he felt change was needed to happen in the country.

No one convinced us to join the protests at Alausa, Ikeja; it was willingly

“I and some couple of friends were t o meet at Ikeja City Mall and we were going to our various homes when we realised that youths had gathered at Ikeja-Alausa under bridge. Obviously, it was the agitation against the members of SARS and we saw how well-dressed with their ‘END SARS’ banners”.

For someone who had been protesting online, he said it was just a privilege to join the young, peaceful protesters who were walking down to Alausa.

“It was a combination of patriotism and a feeling of sadness of how we had gotten to this point as a nation over the years. It was the zeal my friends and I saw that made us join the protests. I joined them. We sang the National Anthem, peaceful songs – not even aluta songs. That was how I joined protests from 8th of October until it went berserk. We marched peacefully from there till we had to converge at the House of Assembly on other days. I marched with guys who wanted the government to do more for them. In our team, there was no discretion of religion, tribalism, or party –saying we are PDP or APC. We were not discussing politics; we wanted to lend our voices. For over two hours at Alausa on the first few days, nobody came out to join our numbers. But the social media especially Twitter, buzzed fast enough when celebrities like comedian Debo Adebayo popularly known as Mr Macaroni and other Twitter and Instagram users joined the movement online.

Akinnowonu said the agitations truly were not far-fetched from the fact that youths craved a better governance and end to oppression.

“I went on to Ikorodu as a passive participant. The only thing we had on us was banners and flags with the same message of police reformation.

At Lekki Tollgate, it was one of the most organised movement ever

Femi Akojede was a protester at the State House of Assembly in Lagos and had revealed that people supported the movement and the energy was very enormous.

“We started off as an avenue of gyration and even danced to music from late afro beat musician Fela Kuti. It was a protest that got the attention of the youths, the aged and most especially, the poor who knew that being on protest grounds would mean that they got free meals and drinks.

“The determining factor for the crowd was the fact that there was food, drinks and comfort at Ikeja and even Lekki. The protest was a peaceful one; there were no disruptions or vandalisation of properties. During and after the protests, there were people available to dispose wastes after consumption. The protest was so organised and represented the Nigerian dream; my Nigerian dream. It was a replica of what I wanted. That protest was not set up as a coup-like incidence. It was just for demands to be meant. Then, it was hijacked by hoodlums.

“Before hoodlums finally took over, there had been two attempts by thugs on some days and they were countered by security guards; there were no policemen on ground. The whole story changed after these thugs got empowered by forces that we know had power, hence, rendering Lagos State into chaos and a in a state of anarchy. Peaceful protesters are in their homes. One thing I know is the whole Lagos protests which I had the opportunity to attend were peaceful. I only hope the government listen to our demands as soon as possible.

We wanted the government to listen to our requests

Adenike Oluwabomi from Oyo State participated in the protests both online and offline. According to her, she would never have stepped out for anything that had to do with going to the streets in Nigeria because she cared for her life and people ended up being killed. But it was different with the #EndSARS protests.

Adebomi said: “During the turn of protests, I had to join because I wanted to be a part of a movement that would change the narratives in this country, I so much believed in the change that was to come. The poor keeps crying day and night; there is hunger in the land, yet the SARS team keeps shortening lives of youths because of how they look, without proper interrogations. It is actually backwards to think that a youth is not entitled to good things of life. The protests were peaceful, we spoke in one voice, we wanted an end to police brutality, and we wanted our leaders to listen to us.

Oladayo Kolapo also protested at Abuja and she said all that happened was peaceful at the onset until people hijacked it.

“It was peaceful in Abuja and people were looking out for one another.

I did not stay for long though. I went at night here in Abuja and when it rained, we were offered raincoats. People slept there overnight. I later heard they were attacked in the middle of the night at the CBN area BY unidentifiable people.

“People were there with flags, played music and did the usual chants and everyone wanted attention from the government”.

She said the other days she went to protest ground; there was food and water, even though it didn’t go round because it was an NGO that sponsored it.

Farook Kperogi in his ’Notes from Atlanta’ on 17th October wrote: “The #EndSWAT/#EndSARS are only the trigger of much deeper youth resentment against the Nigerian state. The protests aren’t just against police brutality; they are also against the oppressive and obscenely unequal character of the Nigerian society.