#EndSARS: Attack on TVC not a surprise ―Otitoju 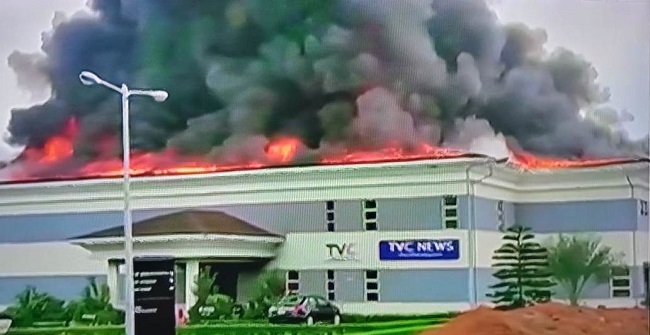 Group Controller, Current and Public Affairs, Television Continental (TVC) News, Mr Babajide Kolade Otitoju has stated that the attack unleashed on the television station was not a surprise.

Otitoju, who was one of the panelists at a public lecture organised by the Wole Soyinka Centre for Investigative Journalism (WSCIJ), held on Monday, stated that prior to October 20 this year, when the attack was carried out, some staff of the station had been receiving different threat messages, about the impeding razing down of the news station.

He added that in order to forestall that, the management actually requested for the services of the men of the Nigerian Police who promptly made themselves available at the premises.

“Unfortunately, when the arsonists came, they all fled, because they neither had teargas, nor rubber bullets on them. What they had were live ammunitions, and we didn’t want any fatality,” he stated.

Otitoju however faulted the claim, in some quarters, that the attack was politically motivated, adding that it was actually carried out by individuals who wanted the protests ‘reported from their own narrow angle’.

“I think it’s extremely dishonest to attribute the attack on the studio to handiwork of politicians, who do not like a certain Bola Ahmed Tinubu. The truth is that the signs had since been there. For instance, in the early days of the protest, one of our reporters was walked out of a rally once he identified himself as coming from TVC.

“So they had served us all kinds of warnings because we were faced with a different form of censorship. From October 11, they had been telling us that they would burn down our station, and the people behind this were protesters who felt that we were not reporting the protest the way they liked, the way they wanted it reported. I even had to post some stuffs that I had said on TV, in support of the protesters and on Twitter, but they were not placated.

“There were a lot of people on social media, who were not interested in a healthy debate, who wanted to see you report events, report activities from their own narrow angle. And once you tried to achieve any form of balance that does not favour them, once you try to be extremely loyal to the truth, you then come under attack,” he argued.

Otitoju added that the COVID-19 pandemic had left a huge dent on the company’s finances, with members having to make some sacrifice for the company to stay afloat.

Another panellist, Mr Simon Kolawole expressed concern that ‘mob censorship’ was gradually becoming a threat to effective journalism in the country.

Kolawole, who is also the publisher of Cable Online News added that nowadays, some journalists are afraid to publish the truth because of the backlash that might come with such publication from the public.

Executive Director, WSCIJ, Ms Motunrayo Alaka explained that the focus of this year’s event,  tagged ‘Masked not silenced,’ was to demonstrate the fact that many journalists still continue to make exploits despite the harsh effects of COVID 19 and the EndSARS crises on the profession.