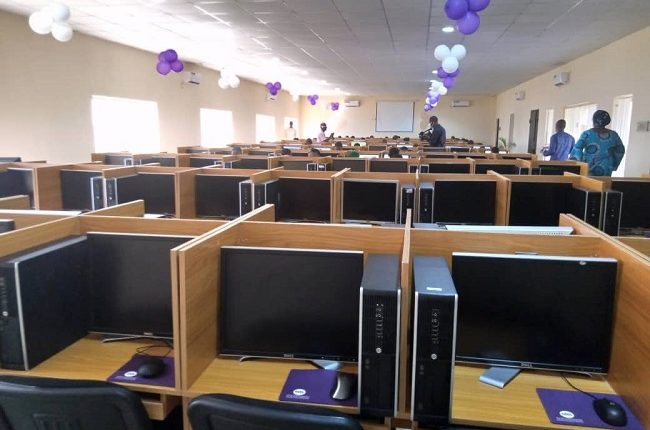 Speaking during the ceremony, the NDIC Board Chairman, Mrs Ronke Sokefun, said the CBT Centre equipped with over 200 computer system and a central server, would ease the stress candidates go through during the examination in Yewa North and Imeko Afon Local Government Area.

Sokefun stressed that the project was put in place as part of efforts to support government programmes towards developing the education sector and enhancing ICT education nationwide.

She noted that the Corporation spent an average of N1billion annually on projects tied to CSR, adding that no fewer than 100 projects had been executed in rural communities.

“In the last 24 months, we have commissioned over 100 projects of this nature in different parts of the country and all, mostly community intervention from the ordinary borehole, we have been able to meet the need of our people. We have improved in terms of staffing and others. The projects cost us not less than a billion naira.

“Towards enhancing ICT education in other parts of the country, the donation of ICT centres should be emulated because as social amenity decay, it’s not limited to education so there are a number of projects we will still put in place and as the Chairman, I can do more, she added.

The State governor, Prince Dapo Abiodun who was represented by the Commissioner for Education, Prof. Abayomi Arigbabu stated that the project was a boost to his administration which had been adjudged as the best ICT focused government in the whole of Nigeria by the federal government.

Abiodun who lauded the kind gesture of the Corporation also stressed that the project came at a time when the education sector needed to be developed through ICT.

#EndSARS: Attack on TVC not a surprise ―Otitoju