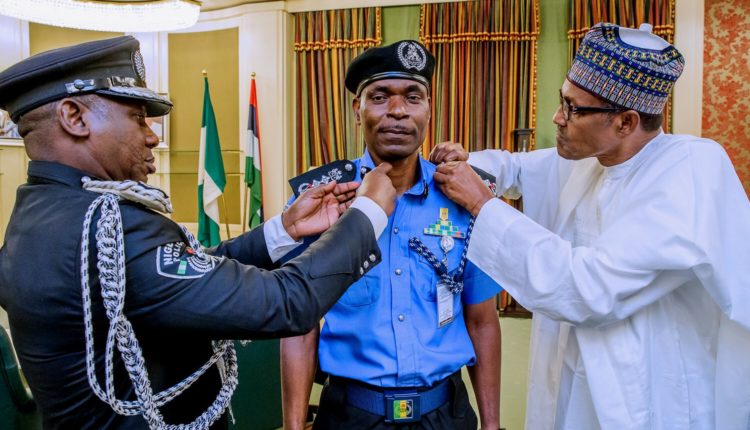 President Muhammadu Buhari has decorated the new acting Inspector General of Police (IGP), Abubakar Mohammed Adamu, with his new rank, with the new top cop promising immediately that he will ensure a level playing ground for all political parties in the forthcoming elections.

The former Assistant Inspector General of Police (AIG) formally took over from his predecessor, Ibrahim Idris, following a joint meeting with the President at the Presidential Villa, Abuja on Tuesday.

Both men spoke with State House correspondents after the decoration of the new IGP.

Asked how he would assuage opposition’s fears on the neutrality of the police, he vowed not to do anything untoward, saying that he will stick within the rules.

“Well, we are professionals. We are going to stick by the rules, we are going to do the right thing. We will not go outside the ethics of our job to do things that are untoward, everybody will be given level playing ground to play his or her politics,” he said.

He expressed gratitude to the President for finding him worthy of the appointment, saying that in recognition of the prevailing security challenges in the country, he will build on the measures put in place by his predecessor.

Adamu stated: “I want to thank Mr. President for considering me worthy to be the next Inspector General of Police. We know that there are security challenges that we need to tackle in the country. Issues of kidnapping, abduction and other security challenges.

“From the strategies put in place by the former IGP, we will restrategise and make sure that we tackle these challenges squarely.”

Speaking earlier, Idris said he had to leave the service having attained the mandatory retirement age of 60.

The former IGP said: “I want to inform Nigerians that today I am 60 years and I think I have reached the pinnacle of my career. So I am going to hand over to my successor, the incoming Inspector General of Police. He is an officer I know very well. We knew each other in the past, we have worked together and I wish him success.”

Noting the challenges confronting the police under his tenure, he said: “I think so far under this government I think the Nigerian Police Force has been making a lot of effort to secure Nigerians. Obviously challenges in the area of recruitment, of course, you aware that the government has just given us the approval to recruit more people yearly. By the grace of God by this year, the number of police officers is going to increase considerably.”

On the coming elections, he also assured that the police is ready for the exercise.

Onnoghen: Another term for Buhari is invitation to dictatorship ― PDP