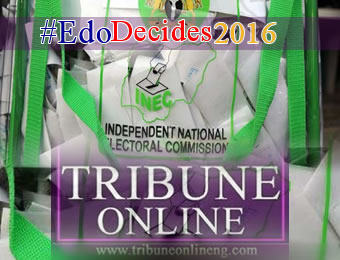 Four days after the Edo State governorship election, leaders of seven riverine communities in Ward 10, Ikpoba Okha Local Government Area of the state, have declared that they were still waiting for the officials of the Independent National Electoral Commission (INEC) to bring voting materials to the area so that they could vote.

Leaders of the mainly Itsekiri communities: Ajamimogha, Ajoki, Kolokolo, Ajatiton, Ikara, Abiala One and Abiala Two, said they waited to no avail for the arrival of voting materials to their communities on Wednesday. But they were shocked to discover that figures were appropriated to the communities wherein they did not vote.

At a venue in Ajamimogha, where leaders of the communities gathered, the community head of Ajamimogha, Pa Edwin Otikperi, said nothing could be farther from the truth that election was held in the area, adding that it was the first time in recent times they would be disenfranchised.

Another community leader and chairman of the Itsekiri Solidarity Movement, Dennis Otikperi, alleged that voting materials meant for the area were hijacked at Ologbo by an individual (names withheld), who they said led a group to thumprint the ballot papers and returned them to Benin.

He said: “Itsekiris and Ijaws in these communities are here today to say that voting materials did not get here in the riverine communities of Ward 10, Ikpoba Okha Local Government Area. Most surprising, INEC still went ahead to announce the results of an election that was never conducted.

“I have written a petition and it has been acknowledged by the Electoral Officer. We want the whole world to know this. We heard that voting materials were stopped at a side of the river by the backyard of one persons (names withheld) and thumprinted.

“We sent our people there to find out and stop them. Our people were, however, chased away from the place by police and army, who accompanied the people. They could not record them because their phones were seized and thrown into the water. We have seven communities in these places. These communities have 15 units and we have over 10,000 votes here. I just want the whole nation to know this.”

The community leaders were joined by the women, who took journalists to the Ajamimogha Community Hall, where they said voting was supposed to take place, insisting that they did not vote on Wednesday.

An ex-militant in the community, ‘General’ Roland Abanara, also corroborated the claims, claiming that the people, who prevented them from voting, caged him at his hotel room on the election day.

He alleged, “That very day, they sent army officers to my hotel at Ologbo. They took my phones and made sure that I was useless until about three. The APC people took the ballot papers and thumprinted everything and said that we voted.”