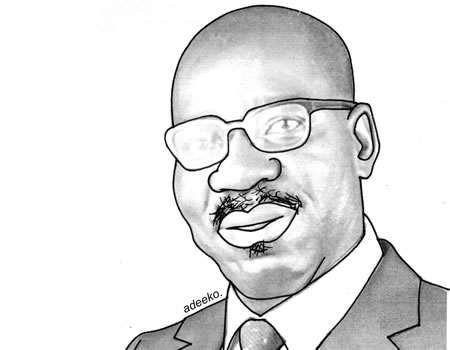 The wind of operational structures sowed in 2016 for the campaigns of the Edo State 2020 gubernatorial election, has gathered enough momentum that no one is left in doubt into which direction it blows.

In 2016 two political gladiators, Godwin Obaseki and Osagie Ize-Iyamu, clashed in the race. Obaseki won by a landslide, but Ize-Iyamu disagreed until the court affirmed the victory of Obaseki and the duo vowed to meet again. This time, after four years, the contenders have switched goal posts. Obaseki is now of the Peoples Democratic Party (PDP), while Ize-Iyamu is the candidate of the All Progressives Congress (APC).

Everywhere you go in Edo, the question is: are you with Obaseki or Ize-Iyamu? While the slogans ‘Obaseki for Governor’ and the ‘Simple Agenda’ rent the air. Impressively, for every ten vehicles you come across in Benin with a sticker, three are with ‘Obaseki for Governor’. Others carry the message, ‘Say No to Godfatherism’, ‘We will not share Edo people’s money to politicians’, among others. But to what extent will this zeal be translated into votes come September 19, 2020 at the polling booth?

Successful political figures are often defined by their ability to distill a message that resonates with their audience. As a fresh-faced state governor back in 1992, the then US Democratic Party presidential candidate, Bill Clinton, understood that he could not prevail against the incumbent George Bush on matters of national security at a time when his country was at war.

But while the Washington elites and television talking heads understood that America’s national security interests could be negatively impacted by developments in the Gulf, the average US citizen was insular and couldn’t be bothered by developments, thousands of miles away. They were more interested in the fact that the national economy was struggling.

Clinton was savvy enough to key into that latent vein of discontent of the electorate that year and came up with a phrase that captured the issue that would determine the race. It wasn’t the Gulf War; ‘It’s the economy, stupid!’ he declared. The rest is history.

President Muhammadu Buhari and the APC triumphant 2015 campaign pulled off something similar. The candidate chose not to make flamboyant promises; he boiled his agenda down to three words; economy, security and corruption. At every campaign stop, he hammered home these three themes.

The focus on these three issues was largely down to the fact that at that point, they were Nigeria’s most obvious problems and the Achilles heel of President Goodluck Jonathan’s government.

Such was the depth of dissatisfaction with the performance of a sitting government that the APC’s change seduction struck a chord with the hearts of Nigerians. Only a deep sense of rejection could have caused Buhari, who lost to Jonathan in 2011 with about 10 million votes, to prevail in 2015 by three million votes. How did the incumbent President blow away 10 million votes? You may ask.

Whichever way one tends to examine it, governance and the provision of dividends of democracy to the people remain sacrosanct. For the past four years, one cannot deny the fact that Governor Obaseki has redefined governance in Edo. It is no longer business as usual. He has provided infrastructure; renovated schools; constructed roads, and invested in human capital development. Education in the state was at its lowest ebb, but Obaseki has changed the narrative.

Prior to his coming on board as the helmsman, something awful, if not traumatic happened. It was the issue of unemployment of youths and women, as well as the total neglect of the state’s infrastructural and industrialisation projects. Today, all these are now history.

Ironically, today in Edo State, there is a twist of irony on the campaigns for the governorship election.

The people believed him among other things and voted for Obaseki and to the admiration of all Edolites, the incumbent governor has not disappointed them.

Only the other day, Oshiomhole had thrown a gimmick and played a double standard; he told Edo people that Ize-Iyamu, who he had said will constitute a disaster in government, should be considered for the governorship position. The question Edo people should ask Oshiomhole is who is the fool? Is it Oshiomhole or the good people of Edo State?

Earlier, he called and labelled Ize-Iyamu with unprinted names; from being a dubious pastor, to a thief and a dangerous person, who carries the Holy Bible in the day and a barrel of gun in the night; it is therefore, irreconcilable that today he is lobbying for the same Ize-Iyamu. The people see it vexatious and offensive especially when they have tested Obaseki’s performance. They are in high spirits and anxiously awaiting the implementation of the governor’s Making Edo Great Again (MEGA) Agenda, having benefited from his administration’s numerous people-oriented programmes and policies in the first term. The people are impressed with his performance and have pledged their support for the governor’s reelection because he has created more employment instead of making more ‘Agberos’.

Edo people believe it is unemployment of their teeming youths that has rendered the state a liability instead of asset to the nation. It has bred prostitution, cultism and youth restiveness, which has heightened insecurity across the state. The people have vowed, repeatedly, that Oshiomhole who is pursuing his selfish ambition of enthroning himself as a godfather in the state, must not be allowed to stand in the way of Edo’s development, having been disgraced out of office as the national chairman of the APC like Lucifer from heaven.

Brave declaration and indignant statements about fighting godfatherism and corruption are now in free use in the state; Obaseki is now the man of the moment. The governor has proved to Edo people that he is not only a fine economist but also a charismatic political leader who feels that good governance is a key element in fostering sustainable development. Successful economic development; he has made Edo people understand that godfatherism is deeply corrosive to good governance. Obaseki has captured the minds of the majority of Edo people and will be reelected.

“We have a mutual responsibility to make sure our schools are properly funded, teachers are properly paid and our students have access to an affordable college education. And if we don’t do something about all these, then nothing else matters.” Obaseki often declares.

If the outcome of the electoral contest is determined by the frenzy of soap box campaigns and acceptability, one can say confidently, that governor Obaseki will carry the day at the end of the vote counting in the September 19, 2020, Edo governorship election, thus securing his second term in office.

But the desperation of his main rival APC, coupled with their threats that the election results will be determined by extraneous factors outside the ballot count calls for concern. They are bent on their use of other obnoxious methods to ferment political violence; they boast of the replication of what they did in the Kogi, Osun and Kano governorship elections. They boast of federal might and their influence on the Independent National Electoral Commission (INEC). These become the main challenges of Governor Obaseki and his supporters ahead of the September 19, 2020 guber poll. However, Edo people have vowed to protect their votes and ensure it counts in the September 19, 2020 gubernatorial election in the state.

Ihimekpen sent this piece from Benin.

What would you do with your time if money is not a necessity?

Before we call for another civil war

Muhammadu Buhari: The journey so far