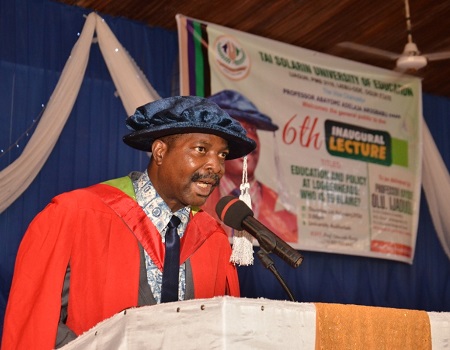 A Professor of Educational Planning and Policy in the Department of Educational Management of the Tai Solarin University of Education, Ijagun, Ogun State, Kayode Olu Ijaduola, has made a strong case for the extension of the duration of the bachelor degree programme in education from its present four years to five years.

This he noted would help teacher education programmes and the profession of teaching to keep pace with developments in the professional world.

According to him, the teacher education programmes advocacy has been adopted by both the National Council in Education and the National Teacher Education Policy (NTEP), while the latter even specifies that one out of the proposed five years should be dedicated to practice teaching.

He made the comments on Thursday while delivering TASUED’s sixth inaugural lecture entitled ‘Education and Policy at Loggerheads: Who is to Blame?’

Ijaduola also faulted the continued implementation of the quota system as regards admission into educational institutions, saying it is time the country dropped the policy, as it is indirectly promoting “hateful sectional and tribal sentiments that may later in life proliferate into serious social, economic and political disparities and tension.”

The essence of the quota system is to promote national unity and equitable development, he noted; but as useful as it is, he said it is also capable of entrenching injustice and creating friction.

“On the one hand, it helps to balance the development of the states, which is highly desirable for national unity. But on the other hand, individuals from the state styled as ‘advantaged’ lose their right of equality with the citizens from the state tagged less developed, and this constitutes injustice to such individuals,” he said.

According to him, “even the United States of America at some point had used the quota system, despite its declarations on equality, but it did not make it a permanent policy. There is no problem with the use of the quota system in Nigeria but the problem has to do with the intensity and duration of its use.”

Ijaduola seemed to suggest that the quota system has outlived its usefulness.

“Even if the quota system is still used for the next one hundred years, will it have totally corrected the problem of educational imbalance in Nigeria? Perhaps, no is the answer. Therefore, it is time to weigh the benefits and demerits of the system in Nigeria to avoid creating other problems while attempting to solve one.”

The lecturer also seemed to fault the ‘overbearing’ roles of the various federal government agencies like the National Universities Commission, Joint Admissions and Matriculation Board, National Council for Colleges of Education and the National Board for Technical Education, among others, whose regulatory functions he said erode the autonomy of the educational institutions.

“Universities, polytechnics, and colleges of education are yet to be granted guaranteed constitutional autonomy to perform the functions outlined in the National Policy on Education. One could safely argue that the functions of higher institutions in Nigeria are performed outside these institutions through extraneous bodies, for instance, the Joint Admissions and Matriculation Board (JAMB); while those of curriculum implementation and maintenance of academic standards are allotted to NUC, NCCE and National Board for Technical Education (NBTE), for the universities, colleges of education and polytechnics respectively. This is at variance with the policies of autonomy and academic freedom,” he said.