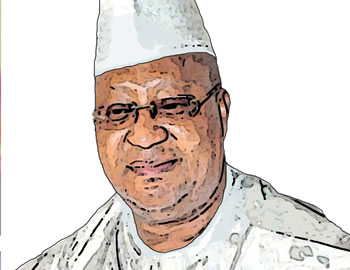 The social contract between elected public officers and the people who voted them into offices dictates that the former should not only ensure effective representation for the latter but also respond to the people’s other needs that may arise. This was demonstrated at Ede, the country home of Senator Isiaka Adeleke, the first Executive Governor of Osun State, when a crowd of constituents from Osun West Senatorial District, last Sunday thronged the city for the 2016 empowerment programme of the senator. Well-wishers from the Osun East and Osun Central also joined others from the West to make the day memorable in the history of giving back to constituents.

A meeting of Osun West district kick-started the programme with members renewing their pledge for the APC in Osun to wax stronger. Various speakers called on those with the means to extend hands of fellowship to the underprivileged in society, with a view to taking some burden off the neck of government. They all commended the effort of Senator Adeleke for being there for the people.

Some of the empowerment tools distributed included motorcycles, sewing machines, two 18-seater buses, deep freezers and others. They were given out to carefully chosen APC members in the district by a committee saddled with the responsibility. Before the items were given out, Adeleke gave a re-assuring message to all. He promised to continue to relate to the underprivileged members of society. According to him, those who are blessed should assist those in need, affirming that “we brought nothing to this world and we will leave without anything.”

He urged his constituents to be self-reliant and embrace entrepreneurship to lift them up to self-sufficiency. Adeleke pledged to continue to identify with the yearnings and aspiration of his constituents who feel more, the pinch of the harsh economic downturn in the country. He called on the people of Osun in general to give support to the various reform programmes of President Muhammadu Buhari, whom he said meant well for the country.

Adeleke used the occasion to appeal to APC members to guard their loins and prevent any divisive tendencies that could weaken their rank and file. The chairman of Senate Committee on Capital Market said his two bills on Criminal Justice and parole among others were being vigorously pursued, while he would gear up efforts in the National Assembly through zonal intervention fund to improve the deplorable condition of some of the federal roads in district. In addition, Senator Adeleke stressed that motions would be moved to compel the executive arm of the government to attend to some of the federal roads in the district as a matter for urgent attention.

He promised the gathering that more school leavers would be afforded the opportunity of jobs within available vacancies at various federal agencies. He also used the occasion to call for absolute religious tolerance among different faiths in the state, as they are all brothers and sister in a united family. Senator Adeleke stressed that now, more than ever before, was the time to embrace peace in the state, so as to complement the efforts of Mr Rauf Aregbesola to move the state forward. Senator Adeleke promised that the empowerment programme was in phases and that those who could not benefit now would be taken care of in subsequent exercises. Governor Aregbesola later arrived and delivered a goodwill message at the occasion.