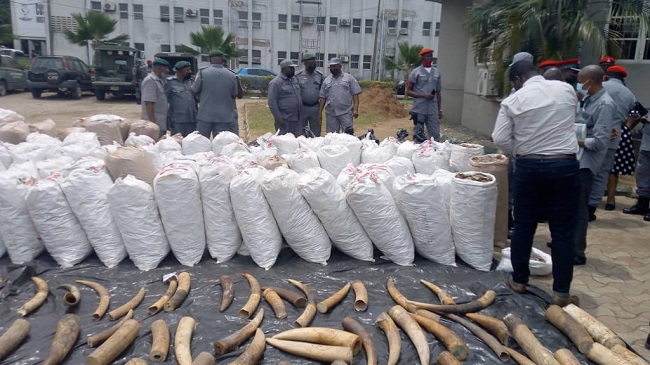 The Nigeria Customs Service (NCS), on Wednesday, said it arrested three suspected smugglers in connection with different kilograms of Pangolin scales and Elephant tusks worth N22.3 billion in Lagos.

According to the Customs CG, NCS’s extensive collaboration yielded credible intelligence that triggered swift and comprehensive actions by the Customs Intelligence Unit and Headquarters Strike force.

He added that the seizures are in line with Section 63 “e” and “g” of Customs and Excise Management Act (CEMA), Cap 45 LFN 2004 as amended, adding that it falls under Export prohibition schedule VI of the extant Common External Tariff, which prohibits their exportation.

“Nigeria is a signatory to CITES convention hence cannot be used as a transit hub. This feast is a testimony of what sincere collaboration between nations can achieve for our world and individual nations in particular.

“Already three suspects who are non-nationals have been arrested. They are Mr Traore Djakonba, Mr Isiak Musa and Mr Mohammed Bereta. The Kingpin, Mr Berete Morybinet is on the run thinking he can evade the long arm of the law. Security agencies at all entry and exit points are on red alert to track and arrest to face justice. He is therefore advised in his interest to surrender himself to the NCS,” he added.

However, he said the suspects arrested would soon have their date in court, as NCS would leave no stone unturned to bring them to justice. He said the Service would extend same treatment to any person or organization remotely connected to this or any illegal wildlife trade.

“While thanking our partners, especially the wildlife justice commission, let me give assurances of the Service determination to treat any and every information with the utmost confidentiality and swift appropriate action(s) to them this tide of illegality,” he said.

Conversely, he said ever-increasing and relevant functions of the global Customs community demonstrate the necessity of Customs actions to raise revenue, suppress smuggling and intercept the illegal movement of items that can compromise national security, economy, health and environment protection.

“Deforestation and depletion of wildlife especially the endangered species have been a global concern with nationals collaboration, sharing intelligence and expertise that would stamp out indiscriminate killings of endangered species.

“In line with global best practices, NCS has been in robust collaboration with embassies of US, UK, Germany with other quarterly meetings that provide a platform for shared experiences,” he added.

Few weeks ago, Eniola Oyemolade, a journalist, decided to get creative while cleaning, by mixing a toilet cleaner and a bleach together. She did this with the thought that if one product works, mixing it with another would make it even better.Customs intercept N22.3bn pangolin scales, elephant tusks in Lagos

Cholera claims over 100 lives in Jigawa