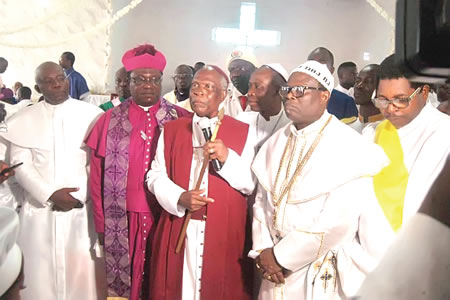 Leaders of the Cherubim and Seraphim Unification Church and the Celestial Church of Christ Church have advocated the need to unite all bodies of Christ.

The advocacy was made at the CCC, Arch-Diocese International Headquarters, Ikosi Ketu, Lagos, at a combined service of the two churches to celebrate the victory of the Lagos State governor-elect, Babajide Sanwo-Olu and his deputy-elect, Dr Obafemi Hamzat in the just concluded election.

The Supreme Head of the Cherubim & Seraphim Unification Church of Nigeria, His Eminence, Dr Prophet Solomon Adegboyega Alao, moved a motion on the subject matter in his speech, which stirred a spontaneous jubilation among the congregation.

The event tagged: “Thanksgiving Service for Sanwo-Olu and Hamzat,” was well attended by dignitaries from all walks of life like Head of Celestial Church of Christ, worldwide, Emmanuel Mobiyina Oshoffa; Iya Adura, Esther Ajayi; Bishop Kayode William; Foluke Salawu, an actress, among others.

“With the development and progress both churches have recorded in recent times, I feel it is high time we united and worked together as one. I want to suggest that we can have a unified name as Cele-Cherubim. I want to appreciate the effort of Iya Adura, Esther Abimbola Ajayi for her commitment to foster unity among the two churches.

“We are not relenting on our plans to come together. This movement is from the spiritual realm. I want us to forget our differences and embrace peace and unity to lift the church to a greater height and serve God with our genuine hearts,” Alao added.

While congratulating Sanwo-Olu on his victory, Alao, also charged the governor-elect, to always put God first in all affairs, just as he assured him of the support and prayers of the white garment churches for a resourceful and productive government.

In his quest to appreciate the efforts of the churches towards Sanwo-Olu’s victory, Cardinal James Omolaja Odunmbaku, acknowledged the contributions and prayers of every member towards the victory. “Though the journey was not an easy task, we thank God for the eventual success journey and the victory. The impossibility became possible through the prayers and support of the white garment churches.

“On behalf of the governor-elect of Lagos, Mr Babajide Sanwo-Olu, we thank the church and the authorities. This development, without doubt will create unity among the fold, as well as open greater doors for the church. Sanwo-Olu will work for God and for all religions in other to achieve a greater Lagos,” he added.

Supporting the motion of Alao, Odunmbaku noted that it was time the churches at different levels buried their differences and embraced unity, as it would make the church more formidable to experience the power and manifestation of God.

In his remarks, Sanwo-Olu, represented by Honourable Prince Bayo Osiyemi, expressed his gratitude for the profound support of both churches in ensuring his victory, as well as celebrating him on his election.