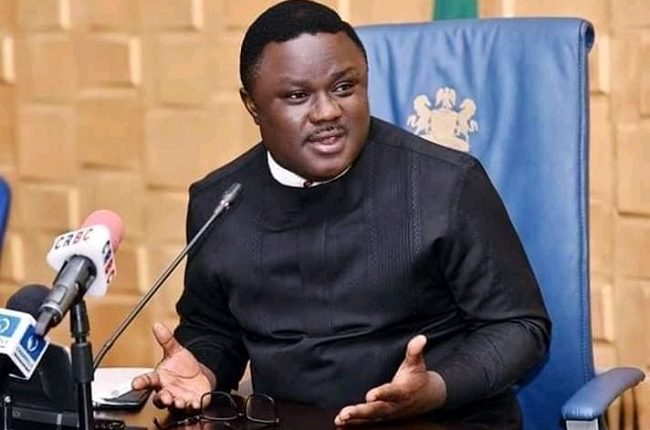 Despite the defection of governor Ben Ayade to the All Progressive Congress (APC), the Peoples Democratic Party (PDP) remains the dominant grassroots party in Cross River state.

This assertion was made Friday at a press conference in Abuja by the Cross River PDP Stakeholders Forum led by former Governor Liyel Imoke.

Reading from a text on behalf of the group, the former two-term governor of Cross River state described Ayade’s exit from the PDP as regrettable but not unexpected.

While expressing the disappointment of the people of the state over the governor’s move, he affirmed that the overwhelming majority of citizens who had supported the party from inception remains in the PDP.

Imoke stated: “Our attention has been drawn to the decampment of the Governor of the state, Sen. Ben Ayade from the People’s Democratic Party (PDP) to the All Progressive Congress (APC) party.

“The exit of the Governor from our party, while being rather regrettable, does not come to us as a surprise as it was not unexpected.

“We join the National Leadership of our party to wish him well in his newfound adventure.

“We understand that the people of Cross River State who have stood firmly with the PDP since 1999 and other lovers of Cross River state are deeply disappointed by this move made by a governor who has won all his elections under the platform of the Party.

“Given the overwhelming Support which he enjoyed under the PDP and the fact that PDP has undeniable strong grassroots in the State, we affirm that Cross River state remains a PDP state.

“An overwhelming majority of Cross River State people are PDP members. Our key stakeholders, members of the National and State Assemblies and Strategic grassroot mobilizers are still members of our great party.

“We as a party, therefore, remain virile and strong. Our shell remains uncracked.

“The leadership of Cross River state under the aegis of PDP since 1999 has led the state to a pedigree of progression and seen to the attainment of all the lofty achievements the state has been known for.”

The former governor noted that the governor’s exit had availed the PDP the opportunity to restrategize and realign in the interest of the party, which he said, had been characterized by a trajectory of growth and development geared towards the path of greatness.

He, therefore, enjoined the people of the state and the teeming members of PDP not to falter in the faith they have in the party.

“While the current events may seem to present a glitch to the progress of the state, we hereby affirm our unwavering commitment towards serving the interest of the good people of Cross River state as we strongly believe that Cross River state shall be great again,” Imoke declared.

Among the stakeholders present at the press conference were all members of the National Assembly from Cross River state including Jaribe Agom Jaribe, Geshon Bassey, Sunday Onor, Daniel Asuquo, Bassey Ekpo, Chris Ngora and Etta Mbora.

Others present were Jetty Agbi, Anna Enegbeni, Daye Arikpo, Asuquo Eke and Divine Anong who is the Deputy National Auditor of the PDP.

In spite of the huge investment in the water sector by the government and international organisations, water scarcity has grown to become a perennial nightmare for residents of Abeokuta, the Ogun State capital. This report x-rays the lives and experiences of residents in getting clean, potable and affordable water amidst the surge of COVID-19 cases in the state…Cross River still PDP  Cross River still PDP

The Lagos-Ibadan railway was inaugurated recently for a full paid operation by the Nigerian Railway Corporation after about a year of free test-run. Our reporter joined the train to and fro Lagos from Ibadan and tells his experience in this report…Cross River still PDP  Cross River still PDP