Crescent University to the rescue 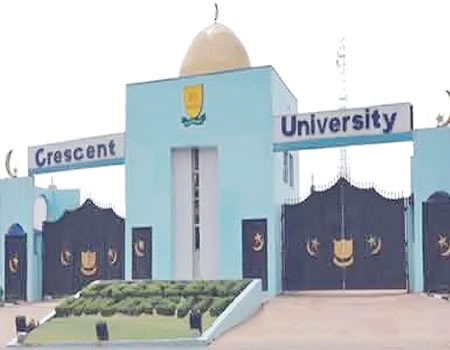 Education remains one of the subjects dearest to the heart of every Nigerian parent even though Nigeria alone harbours 20 percent of the 57 million out-of-schools globally. And as opined by a leading philosopher the easiest way to destroy the future of any nation is to destroy their education system. Regrettably, the higher the enthusiasm of every parent is to give the best education to their children and wards, the lower their expectations are met in the kind of education institutions and facilities available and the low quality products churned out year-in year-out by such institutions.

Progressively, Nigeria destroyed the secondary modern model instituted by the sage, Chief Obafemi Awolowo, to prepare children for skills acquisition. Progressively, we destroyed the dormitory facilities where students character was moulded. Progressively, we destroyed and abandoned the Higher School Certificate programme which, in those days, prepared students for the Cambridge Higher School Certificate Examination and the London University General Certificate in Education [GCE] Advanced Level for direct entry to the universities, and worst of all we threw morality out of the window and allowed cultism and deviant culture to occupy centre stage in our schools and tertiary institutions.

Now we have products of both high schools and tertiary institutions that neither had academic excellence nor moral rectitude. It is disheartening to say that there are a bunch of university graduates who cannot write ordinary application letter! We cannot but lament the deadly blow done to our academic system when the Olusegun Obasanjo military government stole schools and colleges from private owners and ruined them. It was the same story with universities hitherto owned by regional governments which the same wrong headed Administration forcefully acquired and destroyed their enviable standards. The University of Ife was in 1975 ranked the world’s 12th best university architecturally by UNESCO. Go to Ife now and see the ghost of what Professor Hezekiah Oluwasanmi gave his life to.

Parents who could afford the astronomically high fees had no other option than to send their children and wards abroad to study. And unfortunately, most if not all of such students refuse to return to Nigeria after graduating, thereby fuelling our notorious brain drain. Today, the United States is home to over 3,000 Nigerian doctors. More worrisome and humiliating is the current drive of Nigerian parents to send their children and wards to Ghana and other neighbouring countries to get education at very exorbitant rates. Students in those countries hardly go on strike and when you are admitted for a four-year programme, you are sure to graduate on schedule, unlike in Nigeria where a four-year programme may stretch to eight years!

These and many other considerations might have compelled proprietors of private tertiary institutions in Nigeria to open shop. There is a lot to say about private institutions in Nigeria which limitation of space will not permit. Suffice it to say that they are all indispensable to the dirge of education infrastructure in the country.

Two tertiary institutions are worth mentioning particularly for their proven pedigree in morals and character training. Crescent University in Abeokuta and Babcock University in Ilisan Remo have excelled in both academic and moral arenas.

Crescent University recently celebrated its 10th anniversary [2005-2015] and the elated founder and proprietor, former World Court judge, Prince Bola Ajibola, enthused:  “This is a fulfilment of our dream of nurturing people of academic and moral uprightness in the sight of God”, adding “we do not want you [the students] to become educated beasts”.

The university, which is a perfect reflection and image of its founder, may be the country’s answer to all the problems facing other Nigerian universities. The university has never recorded a single day of strike or closure in the last 12 years and has not recorded a single case of cultism. From a humble beginning with accreditation in Banking and Finance the University now boasts over 20 accredited programmes with Colleges of Law, Social and Management Sciences, Natural and Applied Sciences,  Information and Communication Sciences and Environmental Sciences topping the chart.

The female and male hostels are well situated in the very compact university environment and the serenity in the campus provides a home away from home ambience. Parents need not worry about the safety and wellbeing of their children who are treated like family members of a large community.

Professor Ibraheem Gbajabiamila, the current vice chancellor, who has been a professor in the United Kingdom for over ywo decades, left his comfortable zone in Europe to come and give international flavour to the character and academic standing of the well groomed university.

Graduates of the institution can be found in lucrative jobs all over Nigeria, Africa and even in Europe where a good number found ready admission to pursue their masters and doctorate programmes. This heart-warming achievement is in keeping with Judge Ajibola’s assertion that “the most reliable criteria for university ranking especially for parents and sponsors should be quality, character and performance of graduates in further studies and employment”

Little wonder that year in year out, the university is flooded with applications for admission and with rapid expansion in infrastructural facilities the University is poised to be the destination of choice for all students desirous of an institution that would guarantee best academic delivery sandwiched with morals and character. And security.

“The pen is the tongue of the hand, the silent utterer of words for the eyes…” —Henry Beecher.

Adeniyi is a veteran journalist.

My problem with diabetes