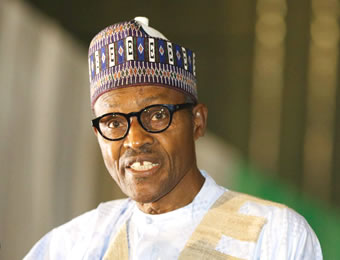 Presenting Nigeria’s statement at the 71st Session of the United Nations General Assembly (UNGA71) in New York, United States, on the theme: “Sustainable Development Goals: A Universal Push to Transform the World,” on Tuesday,  he restated that “fighting corruption remains a cardinal pillar of the current administration.”

President Buhari said Nigeria remained committed to achieving the SDGs, which he noted “underscore the imperative for our collective will towards finding enduring and sustainable solutions to addressing global disparities.”

He also expressed delight that the anti-corruption campaign had started yielding positive dividends, including significant recovery of stolen assets.

“The recovered funds are being channeled towards the development of critical infrastructure and the implementation of social inclusion programmes for our people,” President Buhari said, adding that the capacity of government agencies was being strengthened to institutionalise reforms that would ensure transparency and good governance.

He said Nigeria would continue to call for speedy and unconditional recovery of illicit assets stashed abroad, stressing that “Nigeria supports the development of an international legal framework to enforce anti-corruption measures and strengthen existing international institutions to effectively deal with corrupt practices.”

While acknowledging that Nigeria is not spared the adverse effects of the current global economic downturn, the president noted that his administration remained undeterred and had embarked on comprehensive diversification reforms by shifting emphasis to non-oil sectors of “mining, agriculture, industrialisation, infrastructure development and the creation of the enabling environment for Foreign Direct Investment.”

He stressed that “our strategic objective is to stimulate the economy, restore growth and accelerate recovery. In doing this, we are taking measures to reduce the cost of governance and increase expenditure on infrastructure and ensure environmental best practices.”

Speaking on climate change, President Buhari said Nigeria was proud to have been part of the process leading to the adoption of the Paris Agreement in December 2015 and supports the African Union initiative on the Great Green Wall to halt desertification.

While attributing the drying up of Lake Chad to the negative consequences of climate change, he called for global support to raise $14 billion being the estimated cost of restoration of the Lake over a five-year plan.

The president said it was in furtherance of the country’s commitment to environmental sustainability that Nigeria launched the clean-up of Ogoniland, even as he called on development partners and multinationals to contribute to the Ogoniland Restoration Fund.

He also spoke on dangers posed by global terrorists, adding that “Nigeria has made remarkable progress in our resolve to defeat Boko Haram, whose capacity to launch orchestrated attacks as a formed group had been severely degraded. In the last few months, their operations had been limited to sporadic use of Improvised Explosive Devices (IEDs) against soft targets.”

Meanwhile, President Buhari, on Wednesday, assured potential investors that Nigeria would soon be one of the most attractive places to invest, as his administration has embarked on significant economic reforms to realise that goal.

He gave the assurance while addressing a gathering of political and business leaders from the United States, Africa and other regions of the world at the second United States-Africa Business Forum in the New York.

The session was organised by the United States Department of Commerce and Bloomberg Philanthropies.

Some fiscal incentives, he noted, included, up to five years tax holiday for activities classified as “pioneer;” tax-free operations; no restrictions on expatriate quotas in Free Trade Zones and a low VAT regime of five per cent.

“We intend to make Nigeria one of the most attractive places to do business,” he declared, even as he noted that Nigeria remained the number one investment destination in Africa.

President Buhari added that his administration would continue to strengthen government institutions, in order to address the concerns of investors and ease investments in the Nigerian economy.

He said: “We are weaning ourselves from a historical dependence on crude oil, diversifying our economy and putting it on the path of sustainable and inclusive growth.

“To this end, we have embarked on policies aimed at establishing an open, rules-based and market-oriented economy. We will continue to actively engage with the private sector at the highest levels to listen to your concerns and to assure you of our commitment to creating enabling policies in which your businesses can survive and thrive.”

While stressing that enormous potential exists for foreign investment and for the local economy, Buhari listed sectors which have barely been exploited to include Nigeria’s 180-million population and abundance of labour; arable land; forest waters; oil and gas; solid minerals; livestock and huge tourist potential.

According to him, “These are no doubt challenging times for the Nigerian economy. But let me use this opportunity to boldly affirm our conviction that there is no crisis without an accompanying opportunity.

“In our case, we see Nigeria’s ongoing economic challenges – occasioned mainly by the fall in oil prices – as an opportunity to set the economy firmly on the path of true diversification, sustainable economic growth and shared prosperity.”

The President said that the reform measures taken by his administration since inception in 2015 have started yielding good fruits especially in the areas of security, anti-corruption and revamping the economy.

He said the priority investment sectors for his administration now are improving infrastructure, industrial productivity, agriculture, mining and digital economy where “young Nigerians are increasingly demonstrating that they have the talent and the passion to leverage.”

On United States-Nigeria business relations, he announced the commencement of the US-Nigeria Commercial and Investment Dialogue with a focus on the infrastructure, agriculture, digital economy, investment and regulatory reform to be jointly led by the Nigerian Minister of Industry, Trade and Investment and his US counterpart.

President Buhari said after this Business Forum, he looked forward to increased trade and investment flows between Nigeria and the United States.