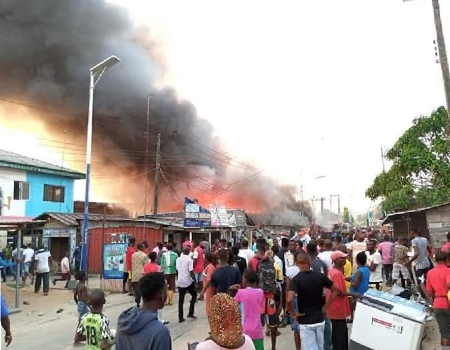 Pandemonium broke out Friday morning when protesting youths said to be supporters of the All Progressives Congress (APC) candidate, David Lyon, set bonfire on Kaima bridge, leaving many travellers stranded.

The commuters which include uniformed men, police officers and military personnel are currently stranded, remained motionless as they could not cross over the bridge leading to the East-West Road.

The protesting youths conspicuously displayed the APC flag, in the hundreds expressed their disapproval of the nullification of the election of the APC governor-elect, Lyon, by the Supreme Court on Thursday.

As of the time of filing this report, vehicular movement on either side of the road connecting the bridge had been grounded causing a long stretch of traffic gridlock on both sides of the East-West road.

How SARS detained me for 48 days, sold my properties, victim tells Lagos panel