EntertainmentBBNaija
By Tribune Online On Oct 7, 2019 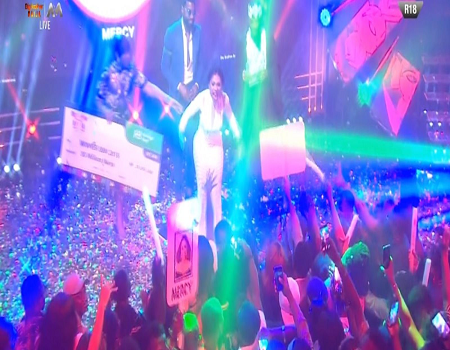 The News Agency of Nigeria (NAN) reports that Mercy was declared winner after polling over 41.77 percent of the votes and went home with N60 million.

The celebrities, who took to their twitter pages to react on the just concluded BBNaija reality show, also hailed Mercy’s prowess as the first female to have won the coveted prize.

The Mavin boss congratulated the winner and also reacted to the extraordinary ass (Yansh) of Mercy.

When he stated ” I know that Mercy has a dope personality. But if she wins nobody should tell that ‘ Yansh’ does not perform wonders.”

@ritaudominic said: “Just realized that Mercy was up against some of the strongest contenders this season wow ooo”.

NAN also reports that history was made on Sunday as Mercy became the first woman to win BBNaija, leading by 41.77 percent of the votes.

While first runner up, Mike Edwards, got 19.94 percent with Frodd, Omashola, and Seyi trailing behind.

‘Made in Nigeria Solutions’ will help tackle nation’s challenges ― Buhari