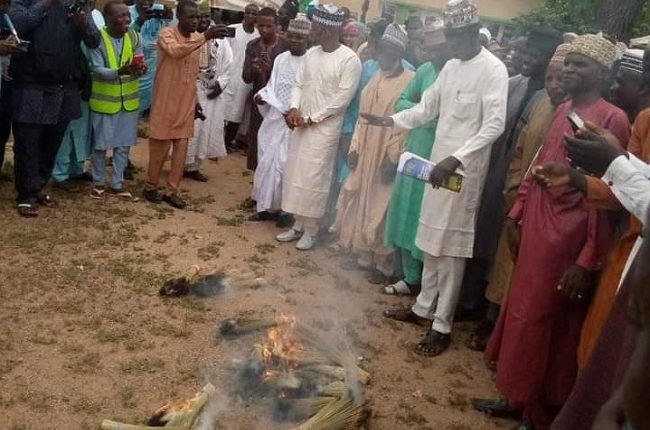 No fewer than 1000 supporters of different political parties in Dass LGA of Bauchi State publicly dumped the parties and joined the ruling Peoples Democratic Party (PDP) in the state.

The majority of the decampees were from the All Progressives Congress (APC) following last weekend’s state congress which has polarized the party while others were from PRP, NNPP and APGA.

During an official occasion, organized to receive the decampees held at the Government Lodge in Dass, headquarters of the local government, Alh Sani Korau (Shatiman Dass), PDP chairman Dass local government, welcome everyone to the ceremony.

He said that, Dass from the inception of democracy in 1999 has never found itself in the opposition until recently due to some reasons which he said have been politically resolved thereby the mass return of the members back to the party.

While receiving the decampees, the deputy chairman of the PDP in Bauchi state, Bala Hadith said that PDP is a one and united party, and the most powerful political party in Africa urging them to support the party to maintain its status for the betterment and development of the state and the nation at large.

While addressing the audience, the former deputy speaker of the State House of Assembly, chairman stakeholders, Hon Sale Abubakar Dumba described the event as a great opportunity for the party to conveniently face the future challenge and urged the people of Dass to continue to support the transformation efforts of people democratic party.

Also in her address, Commissioner of Science and Technology, Maryam Garba Bagel described the development as a great one and re-emphasized that the struggle towards the success of PDP in the state, especially in Dass local government as mandatory, considering the good works going on in the state under the administration of his excellency governor Bala Muhammad.

The leaders of the decampees from their respective parties stated their reason for decamping saying it was because of the developmental project and the policies of Governor Bala Muhammad led administration.

The Commissioner for local government affairs, Abdulrak Nuhu Zaki, while speaking expressed his delight over the incident and urged the people of Dass local government to support Governor Bala Muhammad.

In a closing remark the executive chairman Dass local government, Hon Muhammad Sulaiman wished everyone well and prayed for a successful journey as they’re going back to their respective destinations.

In attendance at the occasion were PDP officials and leaders including, Hon Kefas Magaji, SA on Judicial matters to governor Bala Muhammad, Hon Benjamin Zagi Dass, coordinator to his the governor in Dass local government, Hon Samuel Lawi, Hon Ibrahim Dankaden Dass, Alh Danladi Haruna and many others dignitaries.

2023: Why Fayemi deserves our support