Battle for the soul of Lagos PDP

BOLA BADMUS writes on the leadership crisis bedeviling the Lagos State chapter of the Peoples Democratic Party (PDP) which has, of late, pitted two chieftains of the party, Chief Segun Adewale (aka Aeroland) and Dr Adegbola Dominic, against each other. 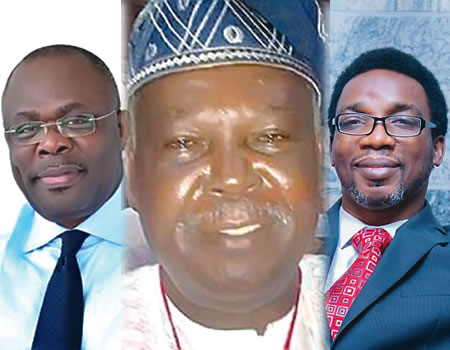 THE simmering leadership crisis rocking the Lagos State chapter of the Peoples Democratic Party (PDP) came to head and assumed a more worrisome dimension moments after the conclusion of the 2019 general election.

The party was thrown into an initial shock in the aftermath of its defeat at the governorship poll in the state as its candidate, Mr Jimi Agbaje, was roundly beaten in the election by the candidate of the All Progressives Congress (APC), Mr Babajide Sanwo-Olu.

As the Lagos PDP was still grappling with this worry, a former factional chairman, Chief Segun Adewale (aka Aeroland), was mooting the idea of taking over to becoming its chairman. He claimed that while he was then a factional chairman during the moment of crisis engendered by the Ali-Modu Sheriff/Ahmed Makarfi face-off at the national level, he was begged to relinquish the seat to Honourable Moshood Salvador who he said later dumped the PDP for the ruling APC in the state.

Adewale said the time was ripe for him to take over the leadership of the party in the state because, according to him, the tenure of the incumbent chairman, Dr Adegbola Dominic, had expired since December 2018, while his own tenure would continue till 2021. Besides, he said the current leadership in the state, headed by a former deputy national chairman of the party, Chief Olabode George, could not win any election and had not been winning elections for the party in the state since 1999 and, therefore, the need for him to take over to show Lagos PDP the winning way.

Some few days ago, Adewale, who contested the 2018 governorship election in Ekiti State on the platform of the African Democratic Congress (ADP), made good his vow as he led scores of party faithful and supporters to the PDP secretariat at Sogunle area of the state, where he formally announced that he had taken over as the Lagos PDP party chairman.

Addressing his supporters, Adewale restated that he remained the authentic chairman of the party, declaring that he was in the struggle to liberate the party from the grip of few individuals who he said had held it captive. He said the incumbent, Dr Dominic, was never elected in any of the state congresses of the party, but allegedly handpicked by Chief Olabode George.

“I emerged as the state chairman during the tenure of the then national chairman, Alhaji Ali-Modu Sheriff, in 2016 to oversee the affairs of the party for four years, which should ordinarily terminate in 2021. I stepped aside when there were some issues within the party, which did not amount to my resignation as the chairman,” he said.

He also boasted that he had the support of most of the local government chairmen of the party in the state, accusing the current leadership of further dividing the party.

Olafeso maintained that Adewale was not a PDP member and therefore, he was not ready to discuss with him. He added, “He went to contest in Ekiti and now he is back. At the PDP National Working Committee, we have taken a decision on him. He is a joker. Dominic remains the Lagos PDP chairman until a fresh state congress is called by the NWC nationwide.”

Following this development, the zonal leadership of the party said what Chief Adewale did amounted to breaking unlawfully into the state secretariat of the PDP and called on the state Commissioner of Police, Zubairu Muazu and the State Director, Department of Security Service (DSS), to restrain him from gaining further access to the PDP secretariat in the state or any other party facility.

PDP national vice chairman, South-West, Olafeso, in a petition he personally signed, said: “Our attention has been drawn to the purported claim to the office of the Lagos State chairman of Peoples Democratic Party (PDP) by one Segun Adewale (aka Aeroland). We wish to categorically state without fear or favour that the said impostor, Segun Adewale, is not a member of our party.

“It might interest you to know that this individual is the governorship candidate of the Action Democratic Party (ADP) in the 2018 governorship election in Ekiti State (see attached) and we do not have record of him defecting to our party, either in Lagos State or any other state chapter.

“Against the aforementioned, we wish to ask that you use your good office to maintain peace and order by restraining Segun Adewale from having access to the state headquarters of our party in Lagos State, currently at 56A, Adekunle Fajuyi Way, Ikeja or any other PDP facility.”

But it appears that the problem confronting the Lagos State chapter of the PDP is far from being resolved as the party chairman, Dr Dominic, had a cause to write another petition to the state police commissioner, calling for the arrest of Adewale, for allegedly breaking again into the party office.

Dominic, in the fresh petition titled: “Unnecessary and Preventable Break-in and Entry at PDP Secretariat,” complained that Adewale and some people who were said to be thugs broke into the party office again early [penultimate] Friday on the pretext that they were holding a party meeting. We are imploring the Nigeria Police, Lagos State Command, to apprehend Segun Adewale in order to maintain the peace and protect our properties and our law-abiding members.”

He said the break-in occurred despite the fact that Adewale was not a member of PDP and the police had been duly informed about his status, long before the occurrence.

“Please be reminded that this is not the first that Segun Adewale (aka Aeroland) is breaking into our party secretariat in this manner, which prompted our party’s national leadership, in a petition to the Lagos State Commissioner of Police, dated Tuesday, 16 April, 2019, to request that Segun Adewale, not being a member of our party, should be apprehended for breaking into our party secretariat,” the Lagos PDP chairman stated.

He also informed in the petition that the party leaders in the state had been hard pressed restraining party youths from rising to defend the PDP secretariat and staff working there, as doing otherwise could have led to breakdown of law and order and possibly bloodshed.

But reacting, Adewale, in a statement issued by his spokesperson, Adelaja, said the petition was laughable and asked, how can he break into his own office as the chairman of the party? He also insisted that he remained the party chairman in the state till 2021.

“Adewale presented his letter of appointment, issued by the then national chairman of the party and court judgment legalising his chairmanship to the police, but Dominic had nothing to present at the meeting. The police, in their effort to resolve the lingering crisis in the party, have asked Adegbola Dominic to produce a letter from the national chairman appointing him as the state chairman of the party, but his representative failed to produced such.

“Adewale, who has now taken charge of the party leadership in Lagos, is relying on the letter of appointment he was issued in 2016 which would terminate in 2021, but Dominic was appointed for just three months after Adewale stepped aside on the advice of the party leadership, and in which the said appointment had expired since December in 2018. Legally and constitutionally, Adegbola Dominic can no longer claim to be the chairman of the party,” the release added.

As things stand, none of the two contenders to the chairmanship seat of Lagos PDP is ready to step down. And with the major stakeholders in Lagos PDP appearing to be diametrically opposed to any attempts at engendering peace, the question on the lips of party faithful, political observers and other stakeholders in the state is, when is the lingering leadership crisis rocking the party would eventually come to an end?