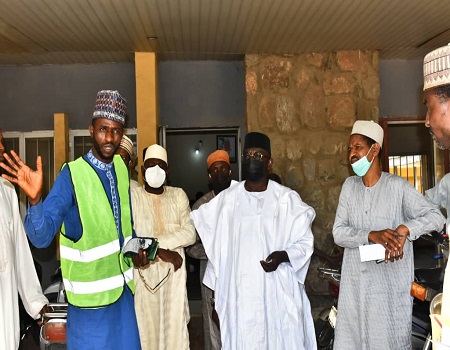 Concerned about the heaps of refuse that are dumped indiscriminately around the Bauchi metropolis, management of the Bauchi State Environmental Protection Agency (BASEPA) have been given a 3-week ultimatum to clear all the dumps in order to keep the state clean as a measure in fighting infectious diseases including the dreaded COVID-19.

The ultimatum was issued to BASEPA by the State Commissioner of Environment and Housing, Hamisu Muazu Shira at a closed-door meeting with the management of the Agency held at its headquarters in Bauchi.

Hamisu Muazu Shira said that the ultimatum became necessary due to the state of indiscriminate dumping of refuse on major streets of the state saying that, during the 3 weeks period, the Agency must work hard with the support of critical stakeholders to tackle the situation thereby ensuring improvement in keeping the state clean.

The commissioner said that ” My emergency meeting with you today is urgent, we have a lot of complaints from people on refuse collections, with the appointment of new Director-General, I give you a 3-week ultimatum to address the issue and see possible improvement”.

He added that ” His Excellency, the Executive Governor of Bauchi State, Senator Bala Abdulkadir Mohammed, Kauran Bauchi, has a lot of expectations from us to see what we can do, and we must to do it, we can’t afford to fail him”.

The commissioner then tasked the newly appointed Director-General of the environmental agency to come up with new reforms and strategies in order to enable the state government free resources for the execution of environmental projects.

He also expressed concern over the attitude of some unpatriotic citizens of the state who engage in sabotaging the efforts of the state government in ensuring effective environmental management and stressed the need for all and sundry to join hands in the ongoing campaign in the state against illegal dumping of refuse on streets or other unauthorised areas.

“It is an insult, at any official assignment people always raised questions about refuse collections in Bauchi, it is an embarrassment, but we must put stop to it. I am also aware of saboteurs, people were been supported to sabotage our plans for keeping Bauchi clean, they will not succeed, we have taken the necessary steps to ensure we overcome the challenges associated with refuse collections”, Hamisu Shira added.

The commissioner, therefore, tasked people of the state to use the waste dumping designated areas to dump their waste considering the outbreak of COVID-19 and as the raining season is approaching.

In his response, The newly appointed Director-General of BASEPA, Dr Ibrahim Kabir assured the commissioner of the total commitment of the agency to work round the clock to achieve the set objectives.

According to him, the Agency will seek partnership with relevant stakeholders to keep the state clean so as to maintain its image.