CoronavirusLatest News
By Ishola Michael - Gombe  On May 22, 2020 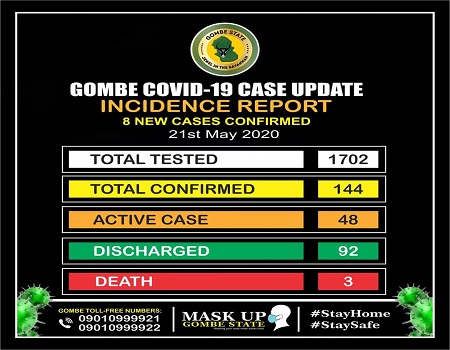 Gombe State has recorded eight new confirmed positive cases of COVID-19 just as one person has been discharged after testing negative.

Update information received from Gombe COVID-19 Case Update Incidence Report indicated that the state has total tested cases of 1702 with cumulative confirmed cases of 144 persons who are currently receiving treatment at the various treatment centres.

With the development as of Thursday, 21st May 2020, the state has a total of 92 discharged COVID-19 cases with 3 deaths.

State Commissioner of Health, Dr Gana Mohammed confirmed the development in a telephone conversation with Tribune Online assuring that the state is doing everything possible to curb community transmission of COVID-19.

The commissioner added that the situation in the state has greatly improved as all the frontline health workers are up to the task doing everything professionally possible to treat the COVID-19 patients.

He then commended the state governor for supporting the state task force on COVID-19 stating that the tremendous support has gone a long way in what the state has recorded since the first case was confirmed in the state.