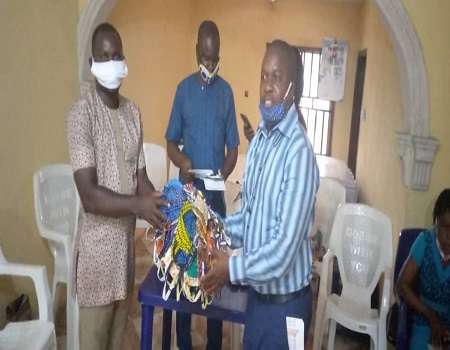 The Nigeria Union of Journalists (NUJ), Delta State Council, has produced and distributed 1,000 locally-made face masks to its members across the chapels in the state.

The NUJ Delta chairman implored them to bear with the council for its inability to provide palliatives and make do with the fabric face masks as a token for NUJ members and some members of the public.

The NUJ Delta chairman, who called on them to observe the precautionary guidelines approved by the government against COVID-19, praised members in the field for conducting themselves in a befitting manner.

The NUJ Delta chairman acknowledged that there had not been cases of violence against journalists except the initial ones at the inception of COVID-19 lockdown which had since been taken care of.

The NUJ Delta chairman, however, craved the indulgence of members to continue to maintain such ethical standard, adding that the Council does not want members to flout orders even as essential service personnel, but to adhere strictly to precautions, rules and guidelines set by NCDC to curtail the spread of COVID-19.

Comrade Ikeogwu also commended the Delta State Government for steps taken and efforts made so far to curtail the spread of the COVID-19.

He, therefore, called on the governor Delta State, Ifeanyi Okowa not to forget the sacrifices of journalists at this time, adding that they too deserved palliatives and PPEs.