Ban on car importation by land: In whose interest? 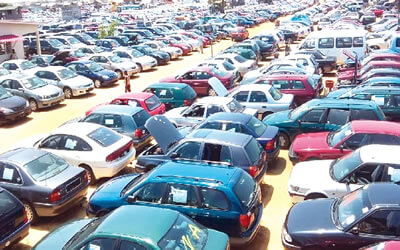 By Tunde Busari It was with much dissatisfaction that a large percentage of vehicle owners, car dealers and prospective car owners in Nigeria received the announcement of the Federal Government, few days ago, when it banned importation of vehicles through land borders.

In the release, the Federal Government emphasized that “the ban is sequel to a presidential directive restricting all vehicle imports to Nigerian seaports only. The order takes effect from January 1, 2017. The restriction on importation of vehicles follows that of rice, whose imports have been banned through the land borders since April 2016. Importers of vehicles through the land borders are requested to utilize the grace period up till December 31, 2016 to clear their vehicle imports landed in neighboring ports.”

Though the National Assemby asked that the decision be halted, the Seaport Terminal Operators of Nigeria was glad with the policy. The chairperson of the group, Vicky Haastrup, reportedly stated that the Federal Government should take a step further by scrapping the high import duty regime imposed on vehicles.

Chairman, Motor Dealers Association of Nigeria (Oyo State branch), Sulaimon Maito argued that, “Our association received with disbelief the news of the Federal Government’s proposed policy to ban importation of vehicles through land borders. Anyway, we are still looking at it to ascertain the true picture of it. That is why I deliberately referred to it as a proposal. But with my experience of the kind of government we have in this country, I realise that the people in government are coming up with something; something which is not going to go down well with Nigeria’s masses.

“This business of ours has created employment opportunities for many youths who could be on the streets causing trouble. These youths come here on daily basis and do some auxiliary jobs; they return home with some money with which they take care of their respective families. Apart from these people, there are still many artisans whose vocations connect with vehicles. I am talking of panel beaters, rewires, mechanics, painters and others. These people will also be affected by the policy because our business and theirs exist side by side. Our members are law-abiding citizens who always support government policies but this one should be given another look.”

Secretary of the association, Bola Adewoyin opined that the “Federal Government should know that we were, in the first place, forced to settle for Cotonu by government previous policies. We are hardworking Nigerians who would not turn to criminal activities to survive. We do our business in the open and comply with law enforcement agents’ directives. The government should rather look inward instead of transferring aggression to us. They know who to hold responsible for the dwindling revenue from import duties. What stops the government from ensuring the big men and women pay correct revenue on multi-million naira luxury jeeps they import into the country? I want to believe that the government knows those who evade taxes and import duties. They should go after them and compel them to pay right taxes and duties. Government should stop making life difficult for the masses who struggle to buy vehicles. I can say it boldly that we are not into illegal business. It is an insult and injustice for anybody to refer to us as smugglers when we process our papers with customs and pay necessary duties. It is better the government reverse the decision because I don’t see it bringing any relief to the masses. And what the masses need now in face of the recession is a relief.”

Another car dealer, Vincent Ayodeji estimated that the policy would have very negative effective on the generality of the populace.

“It is unfortunate that successive governments always ignore us when making decisions on issues that affect our business. It is a clear case of ignoring the principal stakeholders in the matter that concerns them. If they have made consultations with us, they would have got right pieces of advice that would have helped them in moving forward. We have been in the business for over 30 years. This reason alone qualifies us to be respected when any policy that will affect our business is being formulated. But the reverse is the case in Nigeria because we are not politicians. Can everybody be ministers and commissioners? It is not possible, our business contributes to the Internally Generated Revenue of the country and that is where and how we can participate in governance.

“We have travelled to different parts of the world and we know how things are done there. Since the dollar is going beyond reach, we know how it affects us. We deserve concession instead of being punished with harsh policies that favour big, influential personalities. I am sure dealers in Cotonu should be celebrating the new policy now because they know at the end of the day they will be the beneficiaries of it. What we are saying again is that the condition under which we do business in Nigeria is difficult. For instance, any vehicle that spends beyond one week at the port starts to pay demurrage unlike what obtains in Cotonu. In other words, demurrage itself is enough to kill dealers.”

Remi Akerele, a female car dealer stated that “The attitude of our government in Nigeria is that they would have already made up their mind before they come out to announce new policies to the public.We all went out in large numbers to vote in the president because we believed he would bring positive changes to the nation. In fact, I thought President Buhari’s coming would force price of vehicles down. What I am saying is that we had much hope in him. We have not lost the hope yet. But the president should prove to us that he remains the same person upon whom we reposed our confidence before and during the presidential election that brought him to power in 2015. In Holland, Germany, Switzerland and the US, where the vehicles are manufactured, the policies there are so friendly to their citizens and foreigners that the vehicles are affordable. If not because of what we pass through before these vehicles get here, the prices should not be what they are. The prices hardly change where they manufacture the vehicles.”

While the argument goes back and forth, observers want a more inclusive approach to the implementation of the policy.

We are jobless, hopeless, not safe