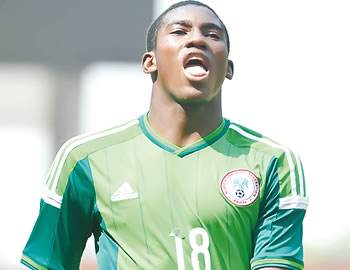 Nigeria U23 coach Samson Siasia believes the form of Taiwo Awoniyi, Sadiq Umar and Junior Ajayi would boost his side ahead of  Rio 2016 Olympics.

Although the Dream Team VI handler is not captivated with Awoniyi’s performance in recent games, but he feels the Liverpool forward will brace up and shine in Rio.

“Taiwo Awoniyi is a good player and he is gradually picking up and will soon return to his explosive form in the attack,” Siasia told Goal.

“This is a player that has proved himself from the Golden Eaglets to the Flying Eagles and now with us.

“This is a player that has helped this team when needed. I won’t forget his contribution in Zambia which got us the ticket to play in the All Africa Games.

“All he needs to do now is to be focused and work hard to get back to his real self. He is an important player that is just coming back to form and we cannot just neglect him but to encourage him. He is really working hard in training and I am happy with what I have seen so far since we arrived here (America).”

He also claims that the duo Umar and Ajayi are good addition to his squad ahead of the competition billed to kick off next month.

“We have enough strikers that can help this team score goals. Umar who plays for AS Roma in Italy is very sharp in front of goal as was evident in the few practice session I have seen him. So his addition to the team will surely add quality to our attack,” he stated.

“We also have junior Ajayi who  is doing very well here and even for his Tunisian club. We all know what stuff Ajayi is made of and he is even sharper in front of goal.

“With hard work in the training and some few friendlies that we hope to play, our attack line should be ready for the Olympics battle”.

U-20 AFCON: F/Eagles will win in Sudan —Nwakali