How to avoid the traps of visa scammers 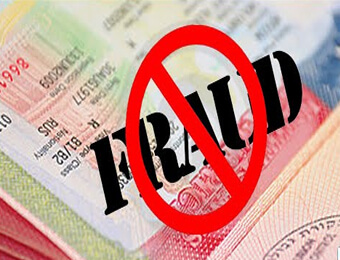 WITH Nigeria’s economy officially declared to be in recession, requiring frantic efforts to prevent it from sliding into depression, the urge to leave the shores of the country in search of places where the pastures are greener is increasing.

But in the rush, many fall into the hands of swindlers or people who profit at the expense of others’ happiness. This is why due diligence must guide those desirous of travelling out of the country when they file visa applications.

Generally and irrespective of the nomenclature given, there are two types of visas. There is the immigration visa, which is for people who want to leave their country of origin to permanently settle in another country. The second is the non-immigrant visa which is for those making a short or temporary visit outside their countries of origin.

There are various methods used by these unscrupulous elements. But some of the general ones include cloning the websites of countries they know usually have high number of applications for all classes of visa or setting up email addresses that are similar to theirs. Investigation by Sunday Tribune reveals that the United State Embassy in Nigeria is the third largest visa processing centre in the world.

In the mails they send to unsuspecting applicants, they present the case that they can provide quick help to facilitate their being issued visa. In the alternative, they send mails to those who have already filed visa applications and waiting for interview appointments. Such mails contain messages of problems with the applicants’ applications and offer to help upon the readiness of such applicants to part with usually some huge amount of money.

They usually get information about the applicants through the social media (Linkedin, Twitter, Facebook and others) or other means and study their targets very well. They are so crafty that they get a copy of any real message from the genuine consular office and make absolutely similar copies with the language being official.

While the United Kingdom requires an applicant to appear in person to present the required travel documents, with no interview except in some special cases, the US Embassy requires all except those renewing their visas to appear before its consular officers for interview before visas are issued.

Some of these scammers besiege Embassies to either fleece applicants going for interview by approaching them to pay to use their link within the Embassies to get visa. They even give their targets some of the questions they will be asked to lure them into parting with handsome amounts of money.

One key factor to a successful visa application is that all facts are laid on the table for the consular officers, while filling in your applications or at interview sessions. Although Nigeria does not have a centralised database where security check can be conducted on its citizens, foreign embassies in the country have different means of getting information about the criminal records and backgrounds of applicants. Well in advance, they determine whether an application will succeed or not based on the facts presented in the applications and the oral testimonies at interviews. Therefore, no travel agent or scammer can guarantee applicants that their applications will be successful.

If all the facts are correctly presented and backed with relevant documents, genuine UK and US visas can be got within a few days, as Mr Samuel Babatunde told Sunday Tribune. “As a first time applicant, I presented all the documents and was told it would take 14 days for a first time applicant. I submitted my application on Friday and on Tuesday of the following week, I got a mail from the UK Embassy that my application has been processed and ready for pick where I submitted same. When I got there and opened it, I got a six month visa,” he said.

According to https://www.gov.uk/government/publications/frauds-tricks-and-scams/fraud-tricks-and-scams, visa applicants can avoid walking into scammers’ spook taking cognizance of the following:

Ghana swears in Akufo-Addo as president

How to make an Instructional video with Screen Recording