Entertainment
By Tribune Online On Jul 18, 2019 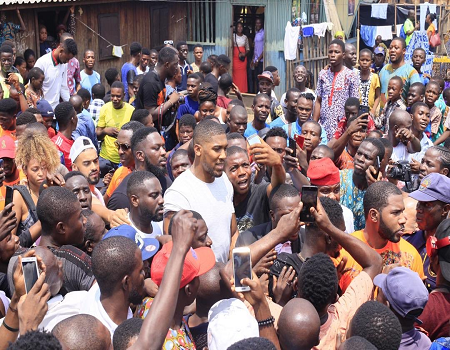 News Agency of Nigeria (NAN) reports that Joshua has been on a Nigerian tour, visiting several landmarks and interacting with fans.

The British boxer, who constantly connects with his Nigerian roots via social media, shared the video of his visit on his Twitter handle @anthonyfjoshua.

In the video, Joshua is seen mixing up with fans before meeting Femi Kuti who showed him around the Shrine.

Commenting under the post, fans joked that Joshua had come to Nigeria to fortify himself for the upcoming match against Andy Ruiz.

NAN recalls that in June, he lost to Ruiz by total knock out in the seventh round.

He surrendered all four of his heavyweight titles in what was considered as one of the biggest upsets in boxing history.

Fans pointed out that Joshua’s reconnection with his Nigerian roots would give him winning edge during the rematch.

@AnthonioC_ tweeted, The next person you going fight will fall like the walls of Jericho.”

@Haddadin7 said, “And this is the champion of the world bonding with his people to feel the edge to focus and fight again for them! Great way to search for motives and #Stayhumble.”

@BetrandDuru said, “There’s power in the roots. Touching base enlightens the mind. We are proud of you champ.”

@Lawalawojide tweeted, “Anthony is live in Nigeria, Andy Ruiz you are in soup. A.J is coming for his Belt.”

NAN reports that A rematch is been fixed for November or December 2019 although the other details are yet to be released.