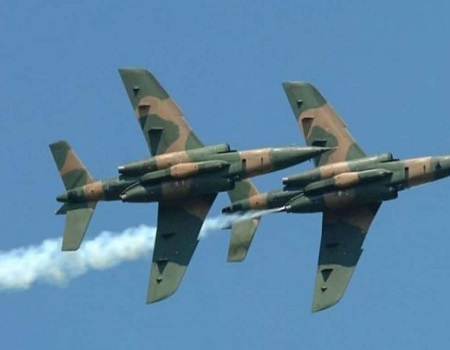 The Defence Headquarters, (DHQ), on Friday, said that several armed bandits have been neutralised and their meeting venue significantly damaged in airstrikes executed by the Air Component of Operation Thunder Strike in Kwaimbana forest area of Kaduna State.

This was contained in a statement made available to newsmen in Abuja by the Coordinator Defence Media Operations, (DMO) Major John Eneche.

According to him, “the air raid was conducted on Thursday after series of Intelligence, Surveillance and Reconnaissance (ISR) missions led to the identification of the hideout along with a building in the centre of the area which was being used by the armed bandits as meeting venue”

He stated that “accordingly, the Air Component dispatched Nigerian Air Force (NAF) jets and helicopter gunships to attack the location.

He explained that the attack aircraft took turns in engaging the target area, scoring accurate hits which resulted in the damage of the building as well as neutralisation of several bandits.

The All Progressives Congress (APC) has admitted that the increase in petrol pump price and electricity tariffs was a serious financial burden on Nigerians.

Edo 2020: Be neutral, international community is watching all of us, INEC chairman cautions staff

Another seven killed, many injured in Plateau community