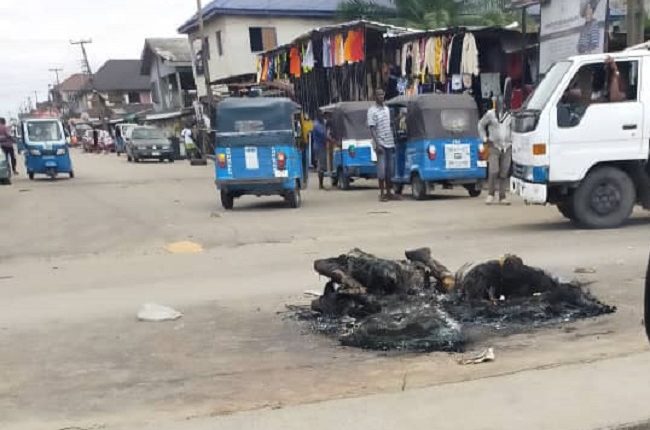 Eyewitness claimed that two of the three suspects were caught shortly after they had dispossessed some residents of Okumagba Avenue in Warri South Local Government Area of their belongings at about 2:00a.m.

The deceased suspects were said to be members of the armed robbery gang of eight which attacked residents of Emebiren and its adjoining streets on the fateful day.

The suspects were said to have stormed the area in a vehicle and a tricycle but were unlucky after one of the victims raised the alarm immediately the hoodlums left the house.

Sources said other victims also summoned courage and raised the alarm which attracted a mob and some vigilante members who chased the suspects until two of them were apprehended. They were thereafter clubbed to death and set ablaze.

The third suspect was reportedly caught at Ojabugbe street moments later where he was also set ablaze by the mob.

It will be recalled that there has been increase in the cases of robbery in Warri and Effurun areas of the state following the initial inactivity of operatives of the Delta Police Command.

Gas firm rewards customers with cars, other prizes in Ibadan

When in danger, use your weapons; you are not meant to kill but maim, IGP tells policemen