A Review of Easier Done than Said by Felix Duyilemi 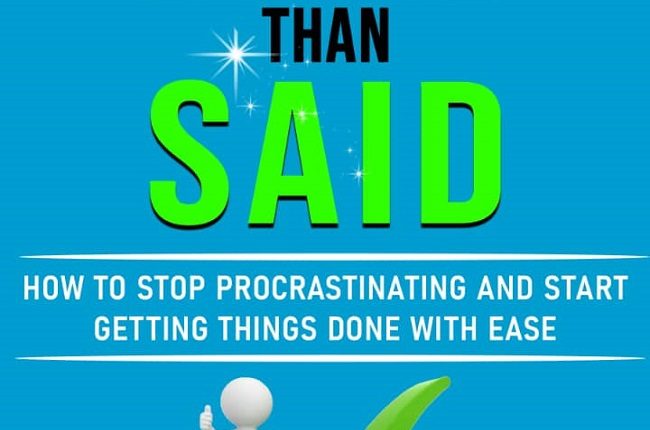 If you have found yourself stuck in the rut of procrastination, always wishing but getting nothing done, then ‘Easier Done than Said’ is a book you have to read.

Written by best-selling author Felix Duyilemi, each page of this book is packed with words carefully and deliberately crafted to yank you off the seat of daydreaming and wishing, onto the track of actions and accomplishment. It goes beyond motivation and provides practical steps to become a person of action.

Throughout the book, the author does not present only his own thoughts but punctuates every chapter with quotes of famous accomplished figures that speak to the main message of this book which is how to move you to act on your dreams and desires.

Beginning from the first chapter titled, “Get out of Wantination,” Duyilemi provokes the reader to stop “wanting to” and start doing. Among other insights, he shares the words of Joan Baez that says, “Action is the antidote to despair.”

The author promises in the following chapters to make a doer out of the reader.

Chapter 2 is titled “Get rid of excuses.” In this chapter, Duyilemi startles the reader with the first sentence: “Getting things done is easier, making excuses is hard.” This paradigm-shifting statement is the introduction to a chapter that provides verifiable evidence of people who did things against the odds of age – being too young or being too old, education, financial constraint and what have you. There are steps the author outlines to make giving excuses a thing of the past.

In chapter 3, “Principles for Productivity”, the author begins by saying “The real thing about productivity is getting things done.”

He repeats a message seen in chapter 2 that the richest men on earth and every other person on earth have the same time. What makes the difference is how these wealthy people use their time. He gives tips on how to use time saying, “If you don’t have a plan for your time, other people do. If you have no priorities, you will fill up the priorities of others.” He encourages the reader to write out a “to-win list” instead of a “to-do list,” and explains the distinction between both in the chapter.

Other tips in this chapter and their explanations include:  “Learn to Say No without Feeling Guilty” and “Don’t eliminate distractions, delay distractions.”

He also spoke about how calmness can help you get more work done. The author demystifies planning in the chapter and makes you see how planning can easily be done.

Chapter 4 is titled “Just Do It.” It’s a dangerous way to live your life if you are always afraid of taking steps,” Duyilemi says here.

He uses the parable of talents told by Jesus Christ in the Bible to illustrate how to create a bias for action.

When you keep what you have and refuse to bring it to the market you are losing your value and the value of it. It’s not the number of talents that really count, but the value inherent in them.

Everything in your hands today has value, don’t bury it, he warns. He then reveals a number of laws that according to him can quadruple one’s productivity.

They are: The law of least effort, The Law of Production before perfection, The Law of Minimum Viable Product (MVP) and The Law of Non-judgement.

“A simple idea can revolutionize your life  if you are committed to it,” Duyilemi adds.

Chapter 5 is titled “The Science of Overcoming  Procrastination.”

In this chapter, the author notes that researchers have found that 95 per cent of human beings procrastinate.

The author distinguishes the functions of two parts of the brain called the limbic system, the pleasure-loving brain section and the prefrontal cortex (the purpose-driven section). He then explains how that developing the prefrontal cortex to overcome the limbic system is key to overcoming procrastination. In other words, your brain can be consciously trained to overcome procrastination.

He adds that once a person realises that low self-esteem “has nothing to do about your ability, but how you think, you can start  shifting your thoughts about yourself and see yourself the way you truly are.”

He shares ideas on how one can engage in “creative procrastination” in this chapter.

“It’s easier to take the second step after the first step has been taken. Do the thing you fear and the death of fear is certain,” Duyilemi said.

He proposes the STING method to get things done.

S for Select a task, T: Time Yourself, I: Ignore Other Things, N. No Breaks, G. Give Yourself a Reward.

If so far, you have felt bad for procrastinating, Duyilemi has some encouraging words: Forgive yourself; no need for self-condemnation, he says in the book.

“Easier Done than Said” is overall an unusual book that is both motivational and a how-to guidebook. Reading it will surely be worth your while.

Review of Angela Duckworth’s Grit: The Power of Passion and Perseverance

Review of Carol Dweck’s Mindset: The New Psychology of Success

A review of Shola Richards’ Go Together