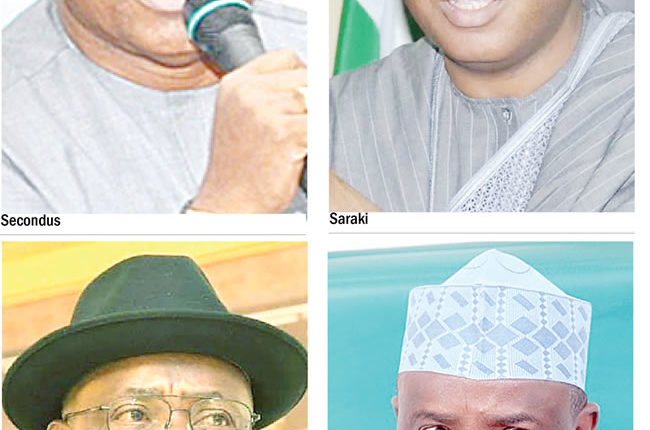 LEON USIGBE interrogates the call accentuated by a member of the Board of Trustees (BoT) of the Peoples Democratic Party (PDP), Alhaji Adamu Waziri to zone its 2023 presidential ticket to the North despite the present presidency being occupied by a northerner.

Officially, the main opposition, Peoples Democratic Party (PDP), had, as if it is a plague, avoided the question of zoning of its presidential ticket for the 2023 election. The thinking within its hierarchy has been that it is too early in the day to be burdened by it as the party is currently actively working on re-engineering itself. The PDP had posited that whatever the All Progressives Congress (APC) may do concerning its ticket at this time cannot pressure it to act and that, in any case, the PDP organs had not met to decide on it.

“The various organs of the party are yet to meet. That is all I want to say. Until the various organs of the party have come to a conclusion, I can’t say anything. But also note that whatever any other party is mouthing, including the APC, will not stampede the PDP.  Ours is a structured political party with huge experience.  And because Nigerians are looking up to our party, we must strictly organise, be meticulous and structured. That is where we are,” the PDP national publicity secretary, Kola Ologbondiyan, recently argued.

But now, the party has come under pressure from within its rank to indicate what it may do concerning zoning it between the North and the South. This is after a member of its Board of Trustees (BoT), Alhaji Adamu Maina Waziri, Minister of Police Affairs under former President Goodluck Jonathan, boldly asserted that the ticket would go to the North. He gave his reason, which is bound to attract some concern in some quarters.

For many PDP faithful, his opinion cannot be taken lightly given the fact that he has been a prominent member of the party, a former minister, and a BoT member from inception. Observers say his argument for a northern presidential candidate for the PDP though his opinion till this point, can go a long way in directing the narrative on the choice of the more appropriate zone the candidate should emerge from.

His argument: “Since democracy returned in 1999, which is now 22 years ago, the PDP had three presidents for 16 years; for President Obasanjo, there was unanimity in the country that he should be drafted, voted and elected because that time required an Obasanjo in Nigeria and that the country needed somebody who could fix the country, return it to its past opportunities; path of good governance and cohesion. He did his best but, unfortunately, in Nigeria, people must also refer to that quality that brought him back that he is a Christian and a southerner. After he finished his tenure, the successor must be a Muslim and a northerner. So, events brought in Yar’Adua who started ailing the moment he assumed the seat and he died. To maintain a system, the vice president took over, less than one year before the expiration of the tenure.

“In 2011, can we denied him (Jonathan) the seat and brought somebody to take over or allow him to continue? I think good conscience requires that he should be allowed to continue and I am one of those who supported his re-election in 2011 based on that consideration. It was based on a written understanding that President Jonathan was going to do one term and fix certain inequities that became visible in the administration of Nigeria. President Jonathan made a commitment and a public statement that he would like to amend the constitution, such that the tenure will be one term.  He said five years or six years was better and would do electoral reform. This was because the system that brought in governments in 2003 and 2009 were disputed by the court and other observers. The Electoral Act would be changed and he would have several projects to embark on. But for one reason or the other, President Jonathan reneged, which became the death knell of the PDP in 2015; though, there were other contributory factors and the system was dislocated.

“As far as the PDP is concerned, the presidency should return to the North because the successor to President Jonathan in 2011 should have been a northern candidate, not Jonathan. That is the understanding in the PDP and that is what I subscribe to. We cannot enforce a system on APC neither can the APC enforce a system on PDP. We should have certain salient points in the PDP, just like they will have in the APC. It is expected in the APC that his (Buhari) successor should be a candidate of southern and Christian extraction. Even though, as far as I am concerned, President Obasanjo came on his merit; that the country needed somebody of his texture and experience. In 2011, the circumstances were said that the incumbent president should be allowed to continue. In 2015, the assumed qualities of President Buhari made him defeat President Jonathan. People should look for a qualitative leader and de-emphasise this issue of subterranean attributes like religion, region and others.”

From the foregoing, Waziri’s main plank for zoning the presidential ticket to the North seems to rest on former President Jonathan’s tenure, where he thinks the PDP should continue from in the belief that its political activities had been on pause. To him, it does not appear to matter that former Vice President Atiku Abubakar, a northerner from Adamawa, was the next PDP presidential candidate after the Bayelsa State-born Jonathan and had the full support of the party in his failed bid to be elected president under the PDP. Waziri suggested that Atiku’s PDP candidacy was purely down to his own doing and should not be counted for the North. More so, as the former vice president’s failure to clinch the post made it the North’s PDP chance inconclusive. “I supported Atiku Abubakar in the 2019 primary election; nobody gave him the ticket. He went to the trenches, fought, and battled, then won the presidential ticket of the PDP. The PDP was not looking for a presidential candidate but a president of Nigeria; somebody from the PDP got the presidential ticket of the PDP but Nigerians did not make him to be the president of Nigeria, which was the ultimate goal. So, that ticket was inconclusive.”

However, pundits aver that an elected president should not just be for his political party but for the country. And so, zoning of the presidential ticket transcends the political party of the elected president. They maintain that this being the case, zoning should be calculated from the last incumbent president even though it is still a matter for the individual political party. This would mean that with the Daura, Katsina State-born President Muhammadu Buhari in power for eight years, though not a member of the PDP, the North has already had its turn and the next president should logically be a southerner.

Some people even within the PDP have argued that despite the eight years of Buhari/North, it may still benefit the PDP to present its candidate from the zone in the belief, rightly or wrongly, that only a northern candidate can win the next presidential election in Nigeria. Waziri equally drove this point home: “Let me say that we must emphasise that the PDP wants to put forward a candidate that can win the presidency. When the time comes, that overriding desire will be a major input into the decision we are going to make. I, as an individual, will be in support that the presidential candidate must be from the North.”

Despite the dust it may raise, Waziri’s proposition has injected greater urgency into the need for the PDP to assume a definite position on its zoning principle as it affects the 2023 presidential election. But the thinking in the party is that it cannot do that now as it may amount to exposing its card prematurely. That leaves the PDP’s 2023 zoning arrangement an open question at least for now.

How we helped Customs generate N1.5 trillion in 2020 —Webb Fontaine