Features
By Kunle Oderemi and Justice Nwafor On Dec 31, 2020 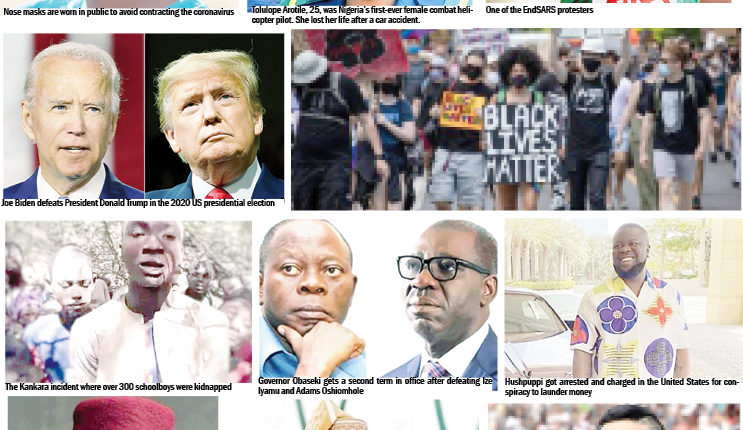 In less than 24 hours, the curtain will be drawn on the year 2020 to herald the beginning of 2021. For the outgoing year, individuals, corporate bodies, institutions and nations will naturally take stock of the gains, pains and possible missteps.

The outgoing year is one in which the lives of many were characterised by bitterness, sorrow and pains, sadness, tragedies and catastrophes with attendant scares and scars in virtually all the key facets of human endeavour.

The global economy has remained in shambles due to the slump in global oil prices. On March 9, 2020, Brent crude futures, the global oil benchmark, were down 22 per cent, last trading at $35.45 per barrel. The crash has been attributed to two major factors – the Coronavirus pandemic and the oil war between Saudi Arabia and Russia. At some points, oil prices hovered around $27 per barrel, way below Nigeria’s then 2020 budget benchmark of $57 per barrel.

To capture the gloom of the year, the Group Managing Director of the Nigerian National Petroleum Corporation (NNPC), Mele Kyari, had warned Nigerians to “prepare for trouble for at least three months. Even if the price of crude oil goes back to $58 per barrel, the situation will still be tough, because there is a backlog of production hanging that has to be resolved.”

Life and living also became miserable due to the scary levels of insecurity. The sudden scourge of the coronavirus pandemic compounded the woes and lamentation as the killer disease exposed the underbelly of Nigeria’s health sector and the hypocrisy of the elite and the establishment. With the measure to contain the spread of the virus, many countries advised its residents and citizens to always wear masks in public places to protect themselves and others. In fact, in most public and private institutions in Nigeria it was made mandatory, without which access would be denied. Beyond the N95 respirators which are largely expensive to the average Nigerian, surgical masks started surging into markets.

President Buhari in a televised speech marked his first major address to the nation since Nigeria’s first confirmed coronavirus case was announced. Buhari said he was “directing the cessation of all movements” in Lagos, Abuja and Ogun for an “initial period” of 14 days. Also various state governments announced various degrees of lockdown which later lasted into a long a while.

The restrictions otherwise, called lockdown came with a lot of abnormalities: Nigerians had to stay at home for more than a month, many without jobs. Hunger increased. To curb the spread, the World Health Organisation (WHO) doled out guidelines on preparedness and measures to contain the spread, while scientists work to make vaccines available. These measures included staying at home, washing hands with running water and soap and wearing facemasks in public.

Prominent Nigerians also died after contracting the virus. President Muhammadu Buhari’s Chief of Staff, Abba Kyari, and former governor of Oyo State, Abiola Ajimobi, among others, later died from the rampaging ruin of the virus.

While restrictions were placed on movement across the world, many latched on to technology. Music concerts were held virtually, even though the feel and the revenue it would generate would never be the same. Hitherto, in-person conferences, awards ceremonies, church services were held virtually. The feel was never the same but it opened a new trajectory: it brought the future to 2020. Students learnt via social media platforms like WhatsApp, on television and radio, mobile and web apps. But it brought to the fore the inequality in the world: lack of and/or inadequate electricity supply to charge gadgets for study, low broadband penetration, especially in rural areas, inability to afford gadgets for study and high cost of data. 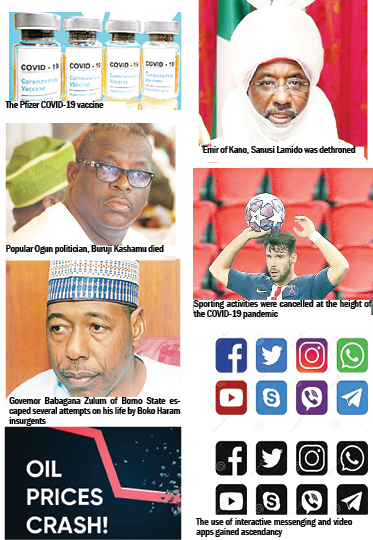 The sporting world was not left off the hook of the pandemic. Most major sporting events were cancelled or postponed, including the 2019–20 UEFA Champions League, 2019–20 Premier League, UEFA Euro 2020, 2019–20 NBA season, and 2019–20 NHL season. Plans for the 2020 Summer Olympics in Tokyo, Japan, were disrupted by the pandemic. The Olympics had been originally scheduled to start at 24 July 2020.

At the threshold of a new year, there’s panic as a variant of the deadly scourge has manifested in the country. With rising paucity of necessary funds, coupled with expensive cost of governance and unbridled corruption, especially in public and private institutions, the citizens and country are in perpetual state of uncertainty and fear about what tomorrow will bring for them.

Designed as part of a wake-up call, and metaphor for the despicable state of affairs,  the recent public protests and angst by the burgeoning number of youths in the country over gross abuse by state agencies like the police and the seeming laissez faire attitude of the authorities were total in ramification. The EndSARS protests appear a lose-all as against the concept of gain-some, lose-some. The death of Black American, George Floyd, in the hands of a white police officer sparked what many described as the largest and most widespread movement against systemic racism in the US and other countries, in recent times. Definitely when the police officer pinned his knee on the neck of the late Floyd, he never envisaged the kind of outrage his despicable act would generate from across the world.

While the movement started and cooled off, the EndSARS protest started in Nigeria. The message was simple: it was time to end the activities of the Special Anti Robbery Squad (SARS), a notorious unit of the Nigeria Police Force alleged to have been involved in extrajudicial killings, harassment and extortion. Nigerian youths spoke in a strong loud voice the world had never heard.

The social media, especially Twitter had been a veritable escape for many youths in Nigeria. In the heat of SARS abuse of power, twitter provided an escape for them — a platform for complaint, expression and ventilation.

The protest grew from a few youths to thousands. Many trooped to the streets nationwide to make their voices heard. It also gained international attention as it trended on Twitter across the UK, US, Canada, South Africa and Ghana. As the youths continued with the protest, their voice got amplified by the support of international music superstars and sports personalities.

During the EndSARS protest, free food and water was shared at protest grounds, people helped one another and many donated to the course. But the sad tale is that hoodlums succeeded in hijacking the protests to ferment trouble, loot people’s shops and destroy government property. This destruction left businesses dead and some gasping.

On the night of 20 October 2020, at about 6:50 p.m, members of the Nigerian Army allegedly opened fire on peaceful End SARS protesters at the Lekki toll gate in Lagos. Amnesty International stated that at least 12 protesters were killed during the shooting. There have been complaints about missing persons and a few were reportedly hospitalised and in critical condition. The Nigerian Army who were the principal actors in the shooting initially denied that the shooting ever happened. A week later, however, the Nigerian Army admitted to an investigative panel in the presence of the media, that it had deployed soldiers to the toll gate on the orders of the governor of Lagos State.

Nigerian disc jockey DJ Switch, made a livestream video of the shooting on her Instagram account. She said at least 15 people were killed in the shootings and that her and other survivors took the victims’ bodies to the soldiers who took them away. She has since left the country for Canada following alleged threats to her life.

In Ibadan, the protest took a most disturbing dimension when the police confirmed the arrest of two suspects allegedly linked with the roasting and eating of the flesh of police officers burnt during the EndSARS protest.

The EndsSARS protest spread like wildfire to mostly all parts of southern Nigeria and so was the hijack by hoodlums. Beyond arson, looting and vandalism, there were jailbreaks and attempted jailbreaks. Inmates lost lives and Nigeria Correctional Service (NCS) offered lame explanations for their deaths.

Thus, the current all motion and no movement as the crux of the matter. North, South, East and the West remain a bedlam of avoidable tragedies of frightening proportions and challenges. Abduction of people, including students, professionals, killings, terrorists still on the prowl, bandits, the euphemism for hardened criminals, lay siege to citizens, just as armed robbers seize everyone by the jugular.

Politics of deception, prebendalism, vindictiveness, and other base values reign across board. Service and visionary leadership are being sacrificed on the altar of personal ego and interest. Even in the USA, a semblance of such recidivist tendency was played out. In the midst of the COVID-19 pandemic, America went to the polls. Joe Biden had pitched his tent against the incumbent US president. Biden won. Donald Trump refused to formally concede the US election, even as senior Republicans began to distance themselves from him, and as recriminations were reported among aides to a man doomed to go down as a one-term president.

As 2021 beckons and in their characteristic undying spirit, Nigerians are resolute, resilient, hoping for purposeful leadership, imbued with progressive ideas and ideals that can restore public hope and confidence.

Nurse arrested for having sex with Covid-19 patient inside toilet