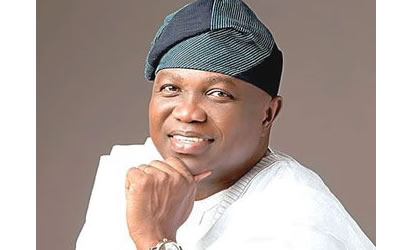 A group operating under the aegis of Itesiwaju Ipilenko Eko Vanguard at the weekend said it has commenced mobilization to give Lagos State governor, Mr Akinwumi Ambode, a minimum of three million votes in the 2019 General Election, having taken a cursory look at his series of achievements of in office and felt the pulse of the residents.

General Coordinator of the group, Hon. Seyi Bamigbade, disclosed this, saying that the current mobilization spearheaded by him in collaboration with the Chairman, Apex Forum, Hon. Olusegun Olulade, who a member representing Epe division in the Lagos State House of Assembly, was aimed at breaking the electoral record in the state.

Speaking when the group inaugurated the United Christian Family Initiative (UCFI) chapter in Oshodi Local Government Secretariat, Legislative Hall in Lagos, Bamigbade, who received people that decamped from the Peoples Democratic Party (PDP) and other organisations to the fold, urged them to support good governance.

While officially inaugurating the UCFI, Hon. Olulade said the body had become part and parcel of the Itesiwaju Ipinle Eko Vanguard.

He highlighted some of the landmark projects of Governor Akinwunmi Ambode that endeared him to the residents, saying the achievements were recorded across all the five divisions of the state.

The lawmaker counselled the peoples about the advantages of collecting their voter cards on time, saying it would help them to return Governor Ambode for a second term.

He recalled that when the national leader of All Progressives Congress (APC), Asiwaju Bola Ahmed Tinubu, presented the Governor Ambode to the party in 2015, there were a lot of discordant tunes among the leaders, given his background as a technocrat.

According to him, part of their worry then was how he will cope and understand the terrain, saying those leaders were now the ones rooting for him now to come back.

This was just as Alagbe noted that the present administration in the state had proven its worth by working assiduously to confront the insecurity, saying it had succeeded in chasing the criminals away.

Group commences mobilization of 3m votes for Ambode ahead 2019