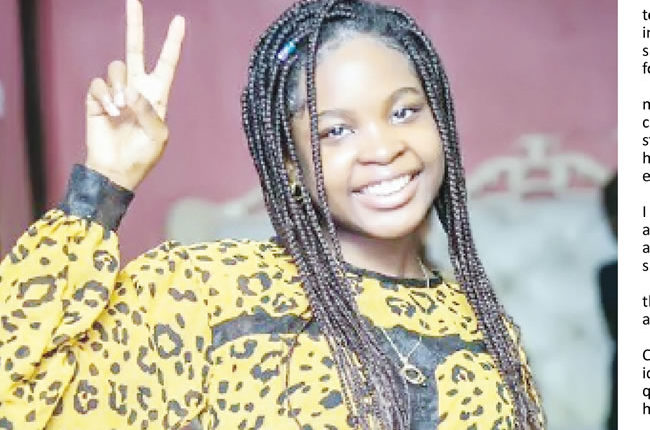 Faith Odunsi has won the Global Open Mathematics Tournament. ENIOLA OYEMOLADE discusses how the 15-year-old won the competition, her future ambition, among others.

Alongside the title of being the winner, Odunsi also won a monetary award of $1,000. The organisers would also come for the official presentation of the award.

The 15-year-old Senior Secondary School (SSS) 3 student from Ijebu in Ogun State had gone through some stages before the final one where she was crowned the winner of the tournament. The first stage featured a computer-based test (CBT) as a result of COVID-19. Here, the competitors had to answer many questions in one hour. Odunsi’s score in the test was 66. The second stage took the same format and she scored 66 again. The quarter and semi-finals were on Microsoft themes. In these stages, questions were asked and the competitors were required to put in their answers; the first to put in the correct answer got 10 points.

She noted that the first stage was the toughest for her as she was just getting familiar with the CBT and timing. She added that she became scared she might be defeated by other pupils at the semi-finals when she entered a tiebreaker with a female student from one of the Asian countries, a newspaper reported.

Odunsi finally won with a margin of 30 points at the finals with the first runner-up scoring 10 points. Odunsi accumulated 40 points. She was convinced she would win when she got the last question correctly.

“Winning the Open Mathematics Tournament makes me happy and honoured. My heart raced when I won but I felt relieved,” she noted, adding that she just smiled when she was announced the winner because she was already tense as it was a tough competition.

On how she prepared for the tournament, Odunsi said her school always organised extra classes for competitions, so her teacher coached her after her daily classes so it would not affect her academic activities. As the date for the competition got closer, the teacher had to pull her out of the class for few days and she practiced lots of past questions from other competitions as well. These extra classes made her split her reading time.

Odunsi noted that her parents were of great support to her during preparations for the tournament adding that they advised her and gave her reading tips. She also thinks she got her mathematical skills from her father who used to attend competitions when he was younger too and who is now a medical doctor.

Asides mathematics, she also loves Information and Communications Technology as a subject. Her love for mathematics is because, according to her, it is basically logical reasoning and using your brain, and once you get the concept, you should be able to know how to solve a problem.

Although many of Odunsi’s classmates sometimes complain to her that they do not understand some mathematics questions, she says she tries to explain to them and let them understand that it is just about knowing the concept and understanding it. She also teaches her friends as she enjoys teaching to an extent. She, however, does not let the teaching distract her or affect her time to study, so she has a personal timetable for studying and solving past questions.

“After I won the competition, many of my classmates were very happy. I also learned that many parents have been coming to the school to enrol their children because of the competition.

Apart from reading books, Odunsi also likes to watch interesting movies, play games once in a while, and even in the last inter-house sports in her school, she won Monopoly for girls.

Odunsi intends to study Computer Engineering because she loves things relating to computer and ICT. She, however, wants to study outside Nigeria because, according to her, the facilities are better abroad and the experience is better.

“I don’t think I will be limited in Nigeria; I just think the opportunities will be better abroad. I have set my eyes on the future and all these little feats can help me get scholarship to study abroad.”

Odunsi advised her colleagues and others thinking that school is difficult not to give up and that one day, they will be able to do it.

Odunsi, had in 2018, set a new record for Cowbellpedia Secondary Schools Mathematics Television Quiz Show by answering 16 questions in 60 seconds and till 2021, no one has broken her record.

As against the record set by Emmanuel Mebude, a student of Ogunlade Memorial Secondary School, Surulere, Lagos, who answered 17 questions in the 60 Seconds of Fame segment of the competition in 2017, Faith Odunsi solved 19 Mathematics questions in that segment to advance to the semi-finals of this year’s edition in the junior category Group F.

Faith, the only female semi-finalist in Group F, had described her experience in the Cowbellpedia Quiz Show as fantastic and interesting.

On how she achieved the feat she said “We were through with our school examinations, so it was easy for our teacher to teach us and give us exercises in the form of the ones we did at Cowbellpedia. There was also an audience to help us get used to the environment. So, that reduced the pressure.”

She said she solved all the mathematics questions in her mind before saying the answers, although for most of them, they were given some papers. They had been taught in her school how to practice questions mentally and avoid errors. In addition, the school organises extra classes for students taking part in competitions.

Being pregnant during my exam was not easy ―Bassey Colette Offiong, UNICAL’s…

I’ve always been enthusiastic to be a health professional —Basirat Rufai, UI Pharmacy…