Wike charges Army to return to traditional roles of security 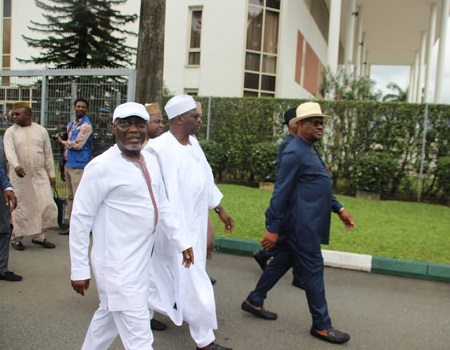 Governor of Rivers State, Nyesom Wike has advised the Nigerian Army to focus on their traditional role of securing the country, instead of illegally delving into politics, which has destroyed their image.

Wike also said that the neglect of critical areas of constitutional responsibility by the Nigerian Army has negatively affected its ability to perform.

He spoke during a Courtesy Visit by Joint Senate and House of Representatives Committee on Army at the Government House Port Harcourt on Friday saying: “The Army should be sent to where there are serious security infractions.”

The military must return to their primary responsibility”, he stated.

He said that the Nigerian Army must channel her resources to where they are needed for the good of the country adding that in Rivers State, the Nigerian Army has been helpful in tackling insecurity and kidnapping.

He said: “The Army has supported us in terms of fighting insecurity and kidnapping. They have worked with other security agencies to improve the security of the State.

“But they played very negative roles during the elections. The Army was involved in ballot snatching and attempts to subvert the will of Rivers people. The authorities should work hard to change the perception of the Army on the streets.”

The Governor said despite the negative roles of the military, the state government under his leadership has invested heavily in the army.

“There is no Governor in this country that can challenge the level of support that we have availed the military.

We funded the operationalization of the 6 Division of the Nigerian Army. I have never turned my back on the army or any security agency in terms of logistics and funding”, he said.

The Governor said that the N100billion allocated to the military in the 2020 budget is inadequate. He also wondered what has happened to the $1 billion withdrawn from the Excess Crude Account for the equipping of the Nigerian Army.

Earlier, Chairman of the Senate Committee on Army, Senator Ali Ndume commended Governor Wike for supporting the Nigerian Army to deliver on its mandate.

“The level of security in Rivers State wouldn’t have been achieved without the support of Governor Wike. If all governors were doing the same things in addressing security challenges like Governor Wike, the country would have been better off.”

He stated that the N100bllion allocated to the Nigerian Army in 2020 budget would not achieve results, noting that efforts must be geared towards attracting more support for the Army.

He praised the Rivers State Governor for the massive infrastructural development witnessed across the state, noting that the changes are noticeable.

Ndume described Governor Wike as a development minded politician who is needed for the growth of Nigeria.

Why I restructured 20 ministries in Osun ― Oyetola