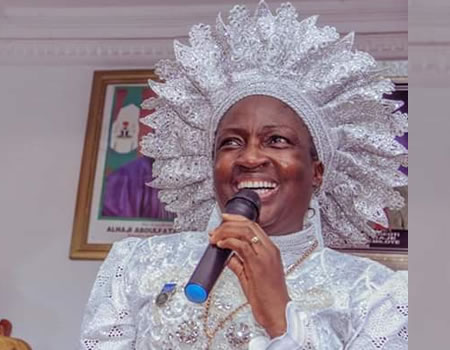 Theatre and Motion Pictures Association of Nigeria (TAMPAN), led by Bolaji Amusan, popularly known as Mr Latin, has given reason for its decision to make Reverend Mother Esther Ajayi as its matron, describing her as a beacon of hope for members of the association and the movie industry at large.

The association, during a meeting with Rev Ajayi, who is also the founder Love of Christ Generation Church at the Sheraton Hotel, Ikeja, Lagos State, had announced that the meeting was to appreciate the woman for the support she had extended to members of the association in the last few years, recalling her financial help to veteran actor, Babatunde Omidina, famously known as Baba Suwe and also the recent support she gave to another veteran actor, Alabi Yellow, who was down with stroke.

Speaking during the meeting that had in attendance actors like Jide Kosoko, Yinka Quadri, Odunlade Adekola, Abbey Lanre, Yomi Fash Lanso, Sokoti, Fathia Balogun, among others, Mr Latin observed that TAMPAN was on a rebuilding mission and has been rallying the support of well-meaning Nigerians towards the transformation of the association.

He added that TAMPAN paid the visit to the woman to inform her of its decision to honour her as its grand matron, saying that “for somebody who has done so much for our members and is always willing to do more for us anytime we call on her, it is only sensible that we make you our matron,” he said.

In her response, Reverend Ajayi thanked the executive of TAMPAN as she accepted to become the matron of the association.