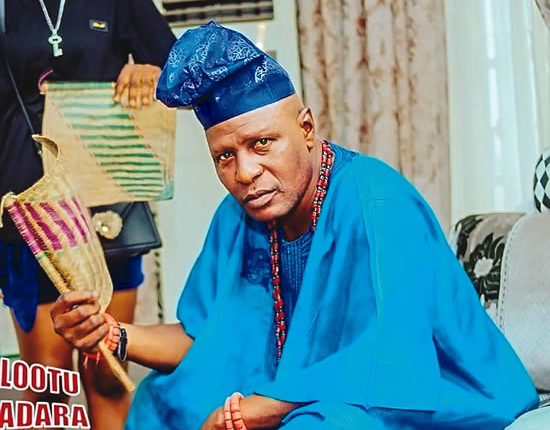 The Nigerian movie industry lost another veteran during the week, comedian, Babatunde Omidina, also known as Baba Suwe. How would you describe the late actor and how close were you to him?

He was a boss to someone like me and he is a legend in this profession. On a serious note, I am not talking about him like this because he is dead, I am saying all these because he was a good man and I pray his soul rests in perfect peace. The first time I had an encounter with him was on the set of ‘Iru Esin’ and then he was really a motivation to us at the movie location.

A number of veteran, actors have died this year. How do you think we can care for many of these veterans when they are alive so that they don’t just die in vain?

According to information at my disposal, the majority of these veterans get assistance from some of us in the industry and they are cared for in the little ways they can be cared for. But we should not forget that, whether they were taken care of or not, whenever it is time for them to die, they will die and there is nothing we can do about that.

Most movies coming from Abeokuta or Ogun State in general are always tradition-inclined, especially talking about charms or rituals. Why is that so?

This is not peculiar to Abeokuta alone. In fact, it is even more common in movies from places like Osogbo and the likes. So, I can’t really say this is an Ogun State thing. Those producing movies like these here in Ogun State must definitely have their reasons for producing such movies, there must be a message the producer of such a movie wants to pass across to the viewers, there is always a motive behind it.

As an actor based in Ogun State, what is your take on the kind of contents dished out to the viewers?

On this issue, we organise various seminars where movie producers and directors are trained on how to improve on the kind of contents we dish out and I know we are improving every day, we are not stagnant. I believe that with time, we are going to get there.

Over the past decades, Ogun State-based actors have been doing considerably well in the industry. We have seen a lot of fast-rising actors become stars and are recognised everywhere too. What do you think is responsible for this?

The reason is love. It is the love among us that is responsible for this. That is why those that are at the top are extending their hands to the new ones to also rise to the top and become stars. If there was no love among us, this wouldn’t be so.

It has been a long time coming for you, how would you describe your experience in the Nigerian movie industry so far?

Since I joined the industry in 1982, there have been ups and downs, but I thank God for the opportunity of being in the industry and the journey so far.

What are the challenges you face as an actor and movie producer?

There is no job without its own challenges, but we thank God for his grace. This job is a delicate one, a delicate one in the sense that what makes sense to you might not make sense to the viewers, which is part of the challenges we face on the job.

Would you say acting has really paid you – moneywise?

I thank God for that because if not for acting, I don’t think I would be where I am today. I don’t know of any other job I would do that would take me to where I am today. So, I would say, acting has paid me well, glory be to God.

In fairness, I can’t say there is one person I can say I singlehandedly raised to become a star, but most of the actors who have come out of Abeokuta to become stars today, I had a role to play in their development. I don’t even need to say it because they themselves know this and they mention it whenever they grant interviews to the media.

Which period would you regard as the best of your acting career?

That would be the year I organised a stage play for the Council of Arts and Culture in Ogun State. We called it ‘Iku Olokun Esin’. That year was a memorable year for me because even till now, a lot of people still refer to that stage play. It is a day I will never forget in a hurry. Even I was proud of my career as an actor that day. I can’t actually remember the year, but it was the Council of Arts and Culture that produced it for the then governor of the state.

What is the most embarrassing moment of your career which you would never forget in a hurry?

I have had several embarrassing moments, especially those periods when what we do was not known to a lot of people, but things are different now. The embarrassment was much, all because my parents were not in support of my acting career. I had run away from home to our theatre group leader’s place and things were really difficult for me because I just joined the group. I ran errands that ordinarily my parents wouldn’t send me all because I wanted to pursue my passion for acting.

What are the current projects you are working on which you would like your fans to watch out for?

There is an upcoming project which I called ‘Danasungbo’ and this movie will be out very soon. I promise my fans and lovers never to disappoint them just as I have never disappointed them. So, they should watch out for this upcoming movie from me, it is coming out this December, let us celebrate Christmas with this new movie. Thank you very much.