Why I abandoned music for entrepreneurial venture ― Asahn Guyton 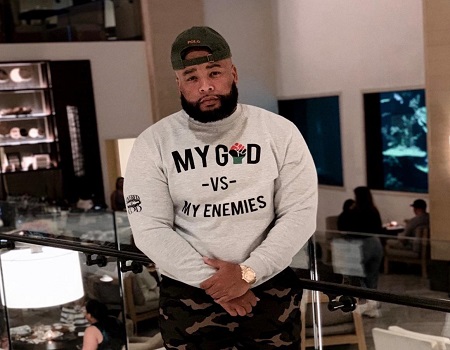 Former hip-hop recording artiste and actor known as Hen-Roq, born Asahn Guyton, who has become known as a successful real estate investor has chronicled his life’s journey in a book entitled “A Kid From South Park.”

In the book, which is set to be released soon, Asahn, who is the Chief Executive Officer of South Park Management LLC highlighted how he started his journey in the world of entertainment and how fate changed the plot, nonetheless, making him a successful entrepreneur because all along his passion was always to find success in life.

In an interview with Tribune Online, he bared it all about his chequered music career, saying “Growing up I always knew I wanted to be something. I wasn’t sure exactly what that something was, I just knew I didn’t want to be anything. So, I started doing music which was my first passion as a teenager. And as I got older I witnessed the freedom of being paid for something that I loved to do. And that felt amazing. I would say that was my first step to entrepreneurship. I figured out something that I loved to do, and also got compensated for it.”

For almost ten years “The Kid From South Park” thought he had his hands firmly on the wheel of his destiny but life had other plans and it soon materialised in what he would describe as a ‘dramatic version.”

“I had a best friend at the time, whom I came into the music business with. This best friend was one since my childhood. All we talked about was making it big in life and in music in particular. And once we got into the business things were great. All of our goals and plans were coming to fruition but then things took a left turn, and we no longer see. So we ended up parting ways. And once that happened I no longer had that same love for the business.

If I had stayed it would have only been for a check. And throughout my journey as an entrepreneur, I’ve learned that when you wake up every day, only to do something for the paycheck and your hearts not in it, you are definitely headed for a crash at some point. So when I left the game I left the game and never looked back. Not even once,” he added.

Asked who this best friend was, he said “That his best friend is none other than Steve Carless, a Senior Vice President of A&R at Def Jam Records. He was my manager for my entire career.

Not to mention my best friend growing up. So, once we clashed in 2012, and no longer saw eye to eye, we went our separate ways. I never did music again. Although me and Steve plan didn’t pan out the exact way that we thought it would, the goal was still achieved because the goal ultimately was for us to be successful, it was for us to win. We may have not won together, but we still won. And we’re still winning in life. And to me that’s what matters most, “ he said.

Born in 1983, Asahn is an American entrepreneur, real estate investor, multi-business owner and now an author. While securing both passive, and multiple streams of income, his continued mission is a promise to encourage and empower others to share their gifts with the world.

Prior to founding South Park Management in 2014, he worked in the entertainment business for well over a decade. Between music and film, behind and in front of the camera, he learned a great deal of experience that he still applies to his journey today; the first being opportunity, and seizing the moment of that opportunity. He learned that no one owes you anything. Once he came to this revelation, he quickly stopped standing in his own path toward success.

Born and raised in Elizabeth, New Jersey, Asahn packed his bags in 2018 and travelled out west where he now resides in Las Vegas, Nevada, acquiring multiple commercial real estate properties from the midwest area of the United States and expanding into the western area of Africa, he has proved that sometimes a change of location can work out for the better.

Asahn’s business is only getting started. He plans to continue his mission to teach his business practices to those from his community so they can achieve financial freedom. The offspring of this yearning is the book titled “A Kid From South Park”.

In a couple of months, Asahn plans to record another huge success by launching a mobile app to be called “Paid N Full.”

According to Asahn, “It’s an invoicing app for fellow business owners to send clients and invoice when it’s time to pay their bills, but this way they can do it directly through the mobile app. I’m going to be launching that app in a few months after my book release.”