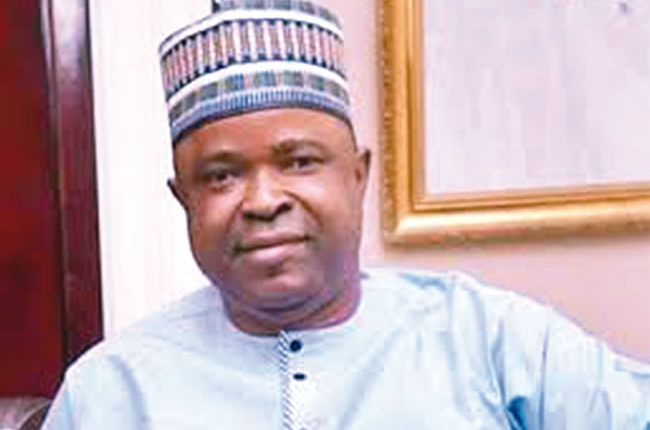 Senator Rafiu Adebayo Ibrahim, who represented Kwara South senatorial district in the eighth National Assembly, was also Chairman, Senate Committee on Banking, Insurance and other Financial Institutions. He spoke with some newsmen in Ilorin on leadership question in the country, among others. BIOLA AZEEZ brings the excerpts:

AS a close associate, how would you describe the politics of former Senate President, Dr Bukola Saraki, as it concerns critical decision making?

He is an exceptional human being ahead of his time and an exemplary one just like the late Waziri of Ilorin, Dr Olusola Saraki. This means he is old Saraki incarnate. But if I can distil him into one word, he is an enigma. Bukola Saraki is a 21st century builder, national pathfinder, democracy warrior with the farthest vision I have ever seen. He is an architect of the modern Kwara, both in infrastructural development initiatives and human capital development. He is hard work and competence personified. On these two qualities I have known him for, I take a personal pride in the fact that no mediocre or hero-worshipper can survive for too long around him.I want to say that his leadership acumen cut across all ramifications. His leadership is entirely formed by his passion for human development, most especially his immediate constituents, the people of Kwara State, and the leadership that is unmatched with any person or group of persons that had surpassed any one that I have ever seen in my entire life. Bukola Saraki is honest and loyal to a fault. He is shrewd; yet very open to superior opinions. He is a good listener; extremely focused, hardworking and, above all, undauntedly passionate about Nigeria’s development. I have never seen him take decisions without inputs from his team members. I have seen him on many occasions make personal sacrifice for his own team members especially at national level. The examples, I mean different events, of scenarios both in Kwara and whilst he was the Senate president were many. But I can confirm that consultation and teamwork are the bedrock and fulcrum of his style. That said, I must note that he is a strong fighter against injustice. So, he is not a very good adversary to look for.

Collective decision is a major ground for measuring leadership. You talked about loyalty, Saraki’s team spirit and respect for superior opinions. How do you mean?

The answers to this question are too many but I’ll restrict myself to your limit, just one. And that is, our collective decision was not to challenge the conduct and outcome of the 2019 general election in Kwara State, despite various and conspicuous irregularities including the unlawful arrest of my person, two days to election. The undeniable truth is that the elections were flawed by many electoral malpractices, manipulations and militarisation. The point is, if we had decided to challenge the whole election results, from senatorial downwards, I have no doubt we would reclaim our victory. But we decided not to toe that path and I am very pleased and happy with that resolution. He is a man that Allah always used to create and sustain the systems for the teeming masses of Kwarans and others across the country. He dwells on the development of people across all spectra. He has a huge knack for philanthropy, a trait which he obviously picked from his father, Oloye Saraki. This is what makes him thick, legendary and, of course, the major cause of the void in Kwara today. No one dares compete with his philanthropy and politics because of his wide exposure in the management of human resources that he had exhibited while serving as the two-term governor of Kwara State, as a former Senate president and in other ways of endeavours he had served.

Most Nigerians know the exploit of the former Senate president on the politics of Kwara. To what extent is Saraki’s influence on Kwara politicians in the national space especially during his senate presidency?

Like they say, charity begins at home. Let me approach this question by first drawing attention to how Dr influenced Kwara politicians even before Senate presidency. The summary is, he made people beyond count, creating and expanding the space for every valuable asset of Kwara to flourish and spread prosperity. In this area of human capital development, he has to his credit tons of products (and beneficiaries) whose lives were tremendously impacted beyond politics. Starting with myself, just to mention a few, you have former Governo Abdulfatah Ahmed; former minister, Bolaji Abdullahi; Dr Ali Ahmad, Honourable Rasaq Atunwa; Honourable Moshood Mustapha; Alhaji Abubakar Kawu Baraje, Honourable Zakari Mohammed; Honourable Aliyu Arman Pategi; Honourable Ganiyu Cook Olododo; Mallam Yinka Aluko; Alhaji Ladi Hassan and so on. On this basis, it is both unsurprising and irrefutable that his reign as Senate president and chairman of the eighth Assembly was the greatest blessing to Kwara State and, indeed, its politicians. First, the most important of this influence is the affirmation that Kwara was no more in the back seat of national leadership. I mean Dr Saraki’s emergence as Senate president translated into the biggest motivation and opportunity for Kwarans. The number of appointments, political elevations, jobs, meaningful empowerment programmes, infrastructural projects and many other things is unquantifiable.I give you an instance. Honourable Ali Ahmad, in his time as member of the House of Representatives, sponsored the highest number of bills in the Green Chamber. As much as many of them facilitated change in the country, some were not allowed to make the desired impact. But with Dr Saraki as the Senate president, Kwara legislators made more impacts on the national stage. The passage of just two of my sponsored bills, the Credit Bureau Reporting Act 2017 and Collateral Registry Act 2017, got Nigeria moved up 24 places in the World Bank’s 2018 Ease of Doing Business Index, specifically from No. 44 to No. 6 in Getting credit Indicator. In essence, Saraki’s Senate presidency offered Kwara politicians (those with value) to shine and make unprecedented impacts. I am not even talking about politicking here. Without him being the Senate president, I wouldn’t have had the opportunity of chairing the Senate Committee on Banking, Insurance and other Financial Institutions, whose oversight covers the entire financial market and monetary policy of the nation, and an opportunity from which we got nothing less than 100 people engaged including top managers and directors. Saraki’s Senate presidency is clearly in record as the best since the First Republic. The eighth Senate, under him, performed creditably well in terms of institutional strengthening of the legislature and economic reforms through law making and various laudable interventions at critical and strategic times.

We’ve allowed ourselves to be controlled by executive —Rep

How tech can impact Nigerian start-ups and SMEs