We are satisfied with level of progress in Gombe dry season wheat farming, FG commends 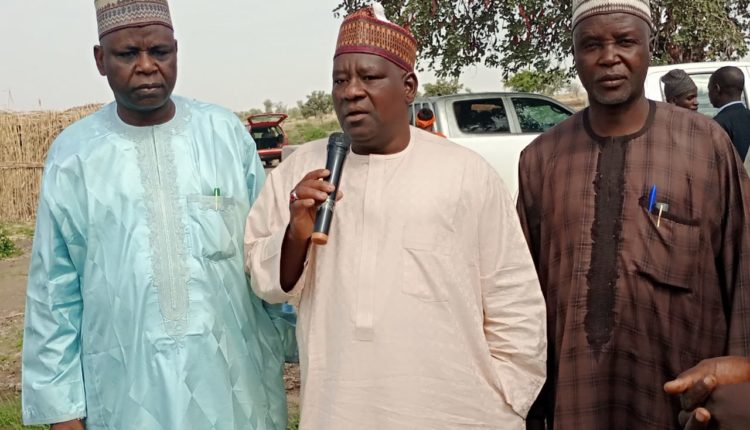 The Federal Government, through the National Agricultural Land Development Authority, (NALDA), has expressed satisfaction with the level of progress made so far in Dry Season Wheat Production in Gombe State.

The position was made known by the head of the NALDA Inspection team, Alh. Umar Yuguda during an assessment visit to the100 hectares dry season farming site in Papa area of Nafada Local Government Area.

Recall that NALDA, in collaboration with Gombe State Government has embarked on dry season wheat cultivation on 200 hectares of land in Papa and Dogon Ruwa areas of Nafada and Kaltungo Local Governments respectively.

The programme is aimed at creating jobs, filling the deficit in the demand for wheat and boosting the economy as encapsulated in President Muhammadu Buhari’s Agricultural Transformation Agenda (ATA).

The NALDA Representative said, “Gombe State was selected among the 9 pilot states to kick-start the programme owing to the enormous agricultural potentials of the state and the commitment of the state government under Governor Muhammadu Inuwa Yahaya towards revamping the Agricultural Sector”.

For the purpose of their visit, Mr Yuguda said, “We are in Gombe to assess the level of progress made so far in wheat production, the programme which was inaugurated by Governor Muhammadu Inuwa Yahaya about a month ago on Dogon Ruwa.

“We are very much satisfied with the level of progress made so far. The state government and of course the farmers are doing a great job”, he added.

He then assured the state government and the farmers of NALDA’s continued support and interventions into the agricultural value chain to stimulate the economy and create wealth for the state and the nation at large.

In his response, the Commissioner of Agriculture and Animal Husbandry, Hon. Muhammad Magaji Gettado said, “Gombe State Government in Collaboration with NALDA supported more than 200 farmers with all the needed inputs for the success of the programme in Papa alone.

“The state government under Governor Muhammadu Inuwa Yahaya will continue to collaborate with NALDA and any development partner that can help us unlock our potentials and improve the well-being of our people”, he added.

Appreciating the gesture, the Deputy Chairman, Nafada Local Government, said they are grateful to Governor Inuwa Yahaya and the NALDA officials for finding their area worthy, adding that thousands of households will benefit from the programme.

I hope to see my son before I die, father of Abdulmutallab jailed in US for terrorism says