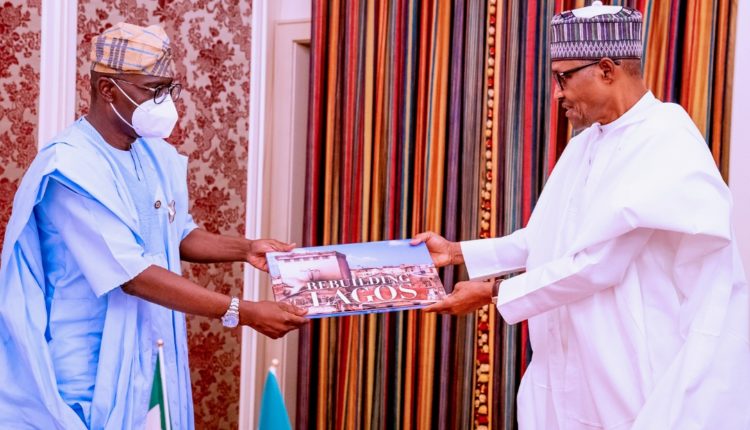 Governor Babajide Sanwo-Olu of Lagos State met with President Muhammadu Buhari at the presidential villa, Abuja on Thursday to discuss the rebuilding of the state following the destruction of properties during the rioting that trailed the recent #EndSARS protests.

Fielding questions from correspondents after the meeting, he affirmed that it would take time to repair the damage done to the state by the events that followed the crackdown on the protests at Lekki Toll Gate.

Recall that there was a nationwide protest by Nigeria youths calling for an end to brutality by the now-disbandment Special Anti-Riots Squad (SARS) eventually culminating to loss of lives and destruction of properties.

Sanwo-Olu confirmed that he had fruitful discussions with the President on, among other things, how to facilitate the rebuilding of the affected parts destroyed by the protesters in Lagos.

He said: “It is also some of the things I discussed with Mr President. Its work in progress.

“To take something down it takes one day, to rebuild it takes 10 years. It’s a journey, not a destination. And so it is going to take a while. We are carefully taking a proper study to know what we need to do, taking our time to get it right. But we’ve started something.

“Businesses that were affected, somebody having their shops looted or burnt or something. We’ve been able to directly begin to support such businesses, especially on a micro, small level using the Lagos state employment trust fund.

“They have started intervening and supporting some of these small businesses, giving them grants, giving them soft loans and making sure that they can come back together very very quickly.”

While noting that “the bigger larger items around infrastructure, transportation,” among others will take a fairly longer time to fix, he added: “We’re talking about a period that is still under three months. So, its still a working document that we are doing right now and we also have to be very creative in how we raise the finance.

“We didn’t have money anywhere, and you know it was towards the end of a financial year and we’re just starting another year. So, it is to be able to make budgetary provisions for these things and be able to raise required funding, both support from the private sector and also from the public sector before we can begin to reconstruct some of those huge infrastructures.

“But we have them all focused and will be tackling them. But the low hanging….As I said are the small businesses that we’ve started supporting so that people can get back to life very very quickly.”

Governor Sanwo-Olu said he also briefed the President about other recent happenings, especially the issues around COVID-19 second wave that the people were witnessing in Lagos in particular, being the epicentre of the deadly disease.

He said he presented the State government’s efforts, the challenges and how both tiers could partner with the relevant agencies to mitigate the effect.

“I also briefed him about security the situation in Lagos and how we can still further enhance and make the place a lot more business-friendly. All the support we are currently receiving and how we can improve on all, especially with some Federal Government agencies.”