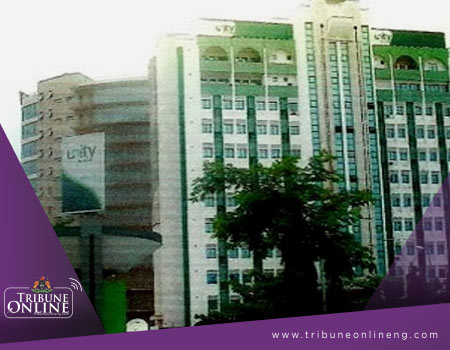 Nigeria’s foremost agric lender, Unity Bank Plc has sustained the growth momentum demonstrated in its 2020 full year earnings as it recorded an impressive performance of 43 per cent in both profit before and after tax in the first quarter (Q1)-2021.

In the Bank’s unaudited Q1-2021 results submitted to the Nigerian Stock Exchange on Friday, the retail lender’s Profit Before Tax grew by 43 per cent to N784.3 million from N550.1 million recorded in the corresponding period of 2020.

As an outcome of increased focus on supporting local enterprises and industry, the asset portfolio also showed a significant growth in loan book of 76 per cent as net loans and advances to customers increased to N223.2 billion up from N126.6 billion recorded in the corresponding period.

The total assets of the bank for the period showed an appreciable growth of 42 per cent to close at N521.5 billion from N366.8 billion in the corresponding period of 2020. The balance sheet of the bank had been considerably de-risked with an NPL ratio of near-zero per cent which it had consistently maintained over time, thus making the bank to rank as one of the best in risk management and credit creation culture.

The bank recorded gross earnings of N11.5 billion, representing marginal decline of three per cent when compared to N11.9 billion posted in the corresponding period of 2020. The remarkable positive growth in profit and other strong indicators recorded in Q1-2021 is a sign of the bank’s growing resilience as the economy continues on a recovery path following the impacts of COVID-19 pandemics.

Other key highlights of the Q1-2021 results included the cash and balances with the central bank which recorded a whopping 326 per cent leap to close at N111.2 billion from N26.1 billion in the corresponding period of 2020.

The lender also grew its customer deposits by 13 per cent to N348.3 billion up from N308.8 billion recorded in the period under review, a strong indication of the growing popularity and acceptance of the bank’s array of innovative products and services and the arrays of new technologies deployed in its operations to enhance high level of customers’ experience and service delivery.

Commenting on the result, the Managing Director/CEO, Unity Bank Plc, Mrs. Tomi Somefun said that the first quarter result is a promising indication of better outcome for the year, profoundly reflecting the bank’s renewed focus on driving efficiency and productivity anchored on targeted initiatives to grow both volume and quality of assets and offer a wide range of customer-centric products supported by novel technologies to its teeming and growing customers in all the six geopolitical zones in Nigeria.

The top-line performance was driven by improvement in net interest income margins which reported 16 per cent growth. To this, Mrs. Somefun stated the bank is replicating the same momentum in the area of liability generation and to gain traction. “We are targeting opportunities across regions and identified segments in retail and SMEs whilst optimising our technology and digital platforms such as Omni-channel UniFi, USSD to deliver bundled product bouquet, operational efficiency and improved unparalleled customer service delivery. Like the multi-language service channels, customers are to expect more innovations as the year unfolds”.

Looking ahead, the Unity Bank’s chief further stated: “The bank will consolidate on the gains it has made on its assets growth and further build the franchise of the brand in many areas of the business to shake off any lethargy to galvanize efficiency across its earning assets, thereby diversifying its earnings base to further grow the bottom-line”.

The bank will thus continue to play formidably and efficiently in the area of its strength especially in the niche space of agribusiness to get more involved in the value chain banking having firmly established its strong foothold in the financing of primary crop production such as rice, maize, cotton, wheat, sorghum, etc. coupled with their rich and robust structures in value creation. In her words, “we hope to continue to expand on this as we play our part in driving the nation’s quest for self-sufficiency in food production, employment generation, foreign exchange conservation and all allied advantages that come with agribusiness.”