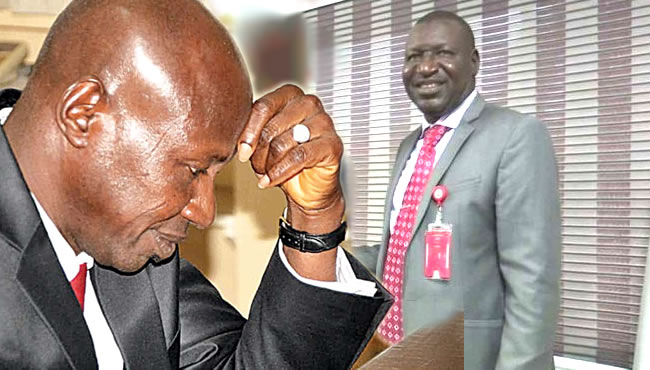 THERE was confusion on Wednesday over who steps in as acting chairman of Economic and Financial Crimes Commission (EFCC), as the Director of Operations in the commission, Mohammed Umar, assumed the position.

There were unconfirmed reports in some quarters that the Commissioner of Police in the Federal Capital Territory  (FCT), Bala Ciroma, had been appointed EFCC boss.

Nigerian Tribune gathered that some members of a power bloc rooted for Ciroma to replace Magu based on the fact that he was a one-time director of operations at the anti-graft agency before he was redeployed and eventually became a commissioner of police.

According to sources, those who wanted Ciroma to replace Magu claimed that the FCT police boss is a crack detective and diligent officer who had excelled in criminal cases as a deputy commissioner of police in charge of Criminal  Investigation and Intelligence Department (CIID) in Abuja.

However, while the news of Ciroma’s appointment was trending, the next most senior officer at the commission to  Magu, Mohammed Umar, a deputy commissioner of police, assumed office in an acting capacity.

Sources at the EFCC headquarters informed the Nigerian Tribune that there were mixed feelings among members of staff over the recent development in the commission.

A staff member who preferred anonymity told the Nigerian Tribune that the Magu saga was a dent on the war against  corruption embarked upon by the commission, particularly in the past four and a half years, adding that “this is not good  for us as an anti-corruption agency at this time.”

The source, who confirmed Umar as acting chairman, said efforts have to be geared towards redeeming the image of the commission without any further delay. He said: “the Director of Operations, Mr Umar, is our new acting chairman.

Honestly, to me, the greatest task ahead of him is to restore people’s confidence in EFCC. “The Magu saga has dented the image of the commission and this needs to be corrected. The Magu leadership of the commission has seen the fight  against corruption taken serious with more vigour, but the allegations against him have put a question mark on the anti-graft war.”

As of the time of filing this report, head, media and publicity of the EFCC, Dele Oyewale, neither picked his calls nor replied a text message sent to him.

Meanwhile, Magu was, on Wednesday, moved back to the Force Criminal Investigation Department (FCID). His grilling by members of the panel sitting at the State House Conference Centre ended at about 8.30 p.m. on Wednesday.