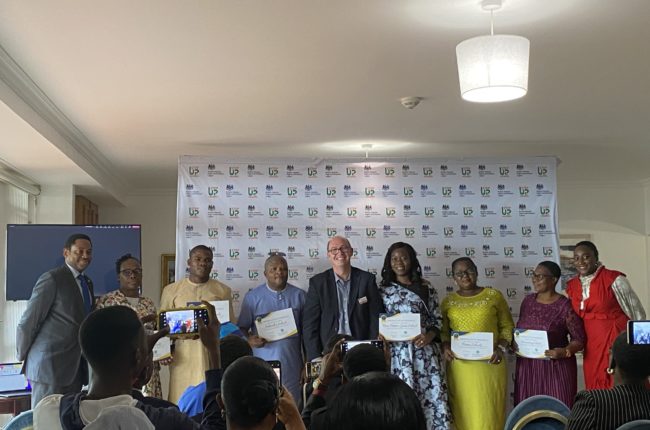 The British Deputy High Commissioner to Nigeria, Ben Llewellyn-Jones, has charged first-time voters in the country to steer clear of vote-buying and selling and other forms of electoral malpractices.

While admonishing young Nigerians at the launch of the First Time Voters Integrity Initiative and Award of Integrity Certified Schools at his residence in Ikoyi, Lagos, he assured them that the UK government is committed to supporting Nigeria’s democracy.

The event was organised by Step Up Nigeria, a non-governmental organisation committed to building bridges for improved governance to tackle corruption in Nigeria.

Llewellyn-Jones said: “Let me tell you that at the UK in Nigeria and the British High Commission, we take, very seriously, the support for democracy in Nigeria.

“For instance, I talk about it, I listen to voters and talk to professionals. So, I feel very personally invested in this project and in the election next year, but I don’t get to vote and this is a really important point.

“Nobody gets to select who wins, I don’t care about that. What I really care about is that your votes count and that the people in Nigeria get to choose their leadership. And that’s what’s fundamental. That’s what happens. I go to the UK, I get to have a say in that election. That’s my election. This is your election and this is what counts.

“Looking at you potential first-time voters, I remember voting for the first time in the UK, I remember my father saying to me, this is a big responsibility. Do it right because you only get to do it once. You get one vote each election.

“And reflecting on why you vote, what you vote for is very important. It’s not worth buying or selling your vote. It’s not worth that. And I think you should reflect on the value of the vote in terms of what you want to see happen. Not what monetarily, it could mean.”

The Executive Director of Step Up Nigeria, Onyinye Ough, decried the situation where young people in communities are using their votes, to negotiate better roads, electricity, jobs etc, adding that the situation is what informed the establishment of the integrity initiative.

“We have started this in Lagos and we will move to other states. We can all do something. We have power and we have votes. We want to raise individuals with integrity values,” Ough said at the event.

Independent National Electoral Commission (INEC) Ag. Administrative Secretary in Lagos State, Adebisi Oladepo Ajayi, who spoke at the event noted that the commission is trying to involve ICPC and EFCC, CSOs in order to stop vote buying while pointing out that there are a lot of voters in the villages who vote massively unlike in the urban areas.

Assistant Chief Superintendent at the Independent Corrupt Practices and other related Offences (ICPC), Mrs Mary Omonoyan, who equally spoke at the event said the agency is also partnering with CSOs that speak the local languages of the people to sensitise them against vote-buying and monitor elections.

Nollywood actor, Greg ‘Teddy Bear’ Ojefua who also spoke at the event urged the participants to vote right and vote their conscience.

“Even if you feel like running out of the country, you will get tired one day. Let’s stay and make the country one that others will want to run to. If you don’t vote, you’re leaving room for rigging. And don’t vote on religious or tribal sentiments,” Ojefua noted.

At the event, proprietors of six secondary schools in Lagos State were awarded integrity champion certificates for instilling the culture of integrity in their schools through the establishment of integrity clubs and teaching of integrity and moral values in the schools.